The Lack Of Intrinsic Value Of Gold

Moses Kim discusses the criticism in Marketwatch that gold is only worth what people are willing to pay for it and the current value is much higher than the cost of production. Kim points out that the cost of production loses importance due to gold's limited supply. See the following post from Expected Returns.

Investing fascinates me because people can have the exact same data and come to completely different conclusions. We can look at the same charts and trade in different directions. Ultimately trading is a zero sum game: when one person loses 50% on the short side, another person makes 50% on the long side. Based on the profits being made on the long side in gold, I can tell you for a fact that portfolios are being decimated on the short side. That being said, one of the things that determines your profitability as an investor is your perspective. Having the write perspective means everything.

I can shoot down the arguments of gold permabears very easily if I were so inclined. I read an article in Marketwatch over the weekend that was so ridiculous, I wasn’t sure if it was even worth refuting. Anyway, the author of the article succinctly summed up the argument of gold permabears in this paragraph:

Certainly there are reasons to own gold in a diversified portfolio. Yet gold isn’t like a stock or a bond. It offers no income, no dividend, no earnings. It is considered a store of value, an alternative currency that’s safe beyond reproach, but it is not cash in the bank, or even the mattress. Gold has no untapped intrinsic value; it is worth only what people are willing to pay for it. And lately, many people have been only too willing.

I don’t want to waste too much time refuting arguments I have already dismantled in the past. But let me focus on this paragraph because it had me shaking my head in disbelief. The author says that gold is only worth what people are willing to pay for it. Hmm that’s interesting, but isn’t every asset worth what people are willing to pay for it? I’m pretty confused here. So if oil is trading at $85 right now, is it really worth some other price in some alternate universe? People are willing to pay much less for real estate than they were 5 years ago. Based on the author’s logic, real estate may actually be in a stealth bull market and we may not even realize it! The no income, no earnings, and no dividend argument is equally asinine. Anyone invested in gold stocks has made a killing; in fact, the author implies as much when he quotes a permabear later in the article who says that gold is being extracted for $400-$450, but being sold for $1400. How this can be turned into a bearish argument is anybody’s guess, but the author does so. He basically says that the price of gold has far surpassed the cost of production. Perhaps this argument would be valid if there were a limitless supply of gold, but everyone knows there isn’t. Like I’ve said numerous times, I often question the intelligence of gold permabears.

Arguments along the lines of the aforementioned are common, but in my experience, the majority of permabears are influenced by charts and price action. Hence I have included a chart of gold with the thinking of permabears in brackets. 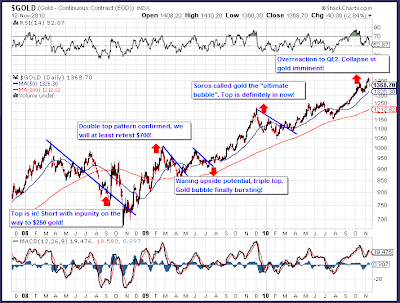 Now here’s a different perspective, and a more profitable one at that. 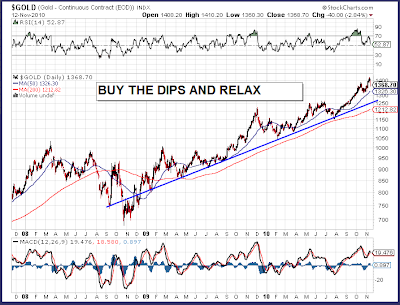 Sometimes my perspectives are wrong as well. You all saw this recently with my view that stocks were set to correct at about 1180. I put in some shorts as a preliminary position, but when the tape told me we were going higher, I started covering. I had no problem in shifting my stance from “short the rallies” to “buy the dips”: I am not going to let my portfolio suffer because I refuse to admit I am wrong. In fact, I am probably right only 60-65% of the time. The difference between me and those who lose money consistently is that when I am wrong, my losses are minimal, but when I am right, my gains are substantial. The only way to do this on a consistent basis is by having a flexible mind that is willing to change with the times.

One of the hardest things to do as a grown adult is to throw your preconceptions out the door and approach new subjects as if you were a baby. 95% of people think they know more about the world than they actually do. You can be sure you will be met with intense resistance whenever you mention a new way of thinking about the world. Most people will dismiss unconventional thinking without taking the time to explore its validity. This is one of the common traits of investors that leaves me convinced a small portion of the investing population will always get the majority of the profits.

No theory can be dismissed offhand until it has been exposed to the fire. I made it a point early on in my education in economics to read and try to understand all perspectives. What resulted was a hybrid view of economics that has served me well. I am not going to be an apologist for any one “school” of Economics, because they all have flaws. A lot of what I say may sound like jibberish, and I understand that, but as events unfold, you are starting to see the merits of plain old objective thinking.

That being said, I am regularly inundated with some truly ludicrous arguments. My biggest concern at the present time is the bond bubble, so I’ll focus on arguments to the contrary. One argument I’ve heard several times is that the Fed is prepared to intervene in the bond market and hold to maturity. As long as the Fed is willing to create demand and hold their positions, everything will be fine. To me, this is an example of fuzzy thinking. The geniuses at Long Term Capital Management thought the same. Sure the LTCM portfolio would have done fine in the theoretical “long-run” provided there were no others players in the market and short-term margin and liquidity concerns were no longer valid, but unfortunately, we live in something called the real world. The Fed is no different from anyone else in that they cannot create trends, they can only exaggerate them. Think the housing bubble. The fundamentals supporting the bull market in housing were valid: favorable demographics, falling interest rates, foreign capital flows, etc. Then Wall Street conjured up exotic securities out of exotic securities to the point that it was dubious whether we could even call these creations assets. Again, Wall Street exacerbated the trend, it didn’t create it. Remember, loan originations peaked right when the bubble was about to pop. The same pattern is unfolding in U.S. government bonds.

Most investors see things only from a domestic perspective, which leaves them with enormous blind spots. How can gold prices go up when real estate in America is falling? How can U.S. bonds collapse if the Fed is buying securities? People hate to admit it, but so many think on a very elementary level. I can’t get into everything now, but I promise I will explain my thoughts at a future time. We must all keep an eye on the bond market- it will sound the horn when a crisis is about to approach.