Does Bernanke Intend To Debase The Dollar?

Elliott Morss defends Bernanke's stimulus measures by speculating that Bernanke aims to decrease the value of the dollar globally so manufacturing will move back to the US. Morss warns about holding dollars as the expectation of a falling dollar could result in huge capital outflows. See the following post from The Street. 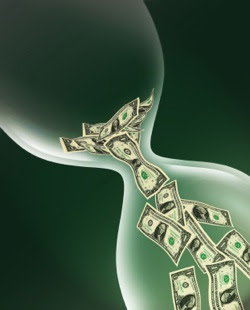 In a recent two-part series on austerity vs. deficits in European countries and the U.S., I concluded that the U.S. needed a new stimulus package.

For those of you who disagree with me, I ask what level of unemployment you would tolerate for "austerity." I estimated that without the existing ARRA stimulus, U.S. unemployment would be over 11%. And because state and local governments cannot "print money" a further dramatic reduction in police, fire, and teachers in our own communities would have occurred. And now, with a very uncertain recovery, we need another stimulus: government spends money to put people back to work, and a weaker dollar will bring manufacturing jobs back to the U.S.

Bernanke, an expert on depressions and recovery, is of the same mind. And yes, he also read in college what some "defunct economist" said about "liquidity traps," and he knows we are in one now. So he does not expect that much job creation will come from $600 bond purchases? Probably not. But he also understands that the U.S. Congress is so dysfunctional that it will not pass a new stimulus package in the foreseeable future. But he has another reason for his bond purchases that he cannot state publicly.

Bernanke knows all this. He is also aware that the G-20 nations have agreed not to get in a currency war. However, he watches the numbers:
The Chinese Commerce Minister was recently quoted as saying "In the mid-term, the U.S. dollar will continue to weaken and the competition between major currencies on exchange rates will intensify, increasing risks for businesses and affecting international trade development. The yuan is under enormous appreciation pressure. Both foreign exchange risks and competition pressures are on the rise for companies."

I can imagine that Bernanke is thinking the following:

And if he is, hooray for Bernanke! It is time to "debase the dollar"!

Take a look at the following table. We often hear about the trade balance or current account deficit but not so much about financial flows.

Note that the net financial inflows, including foreign government purchases of U.S. Treasuries, have provided an offset to the U.S. current account deficit.

But let's focus on private capital flows. The following table presents private capital flows since 2006. In the financial panic at the end of 2008, everyone brought their money "home." But in 2009, Americans started to invest overseas ($413 billion) and foreigners continued to withdraw funds from U.S. capital markets ($278 billion).

If the expectation that the dollar will weaken becomes pervasive, what will happen? Americans will invest more of their assets offshore, and foreigners will reduce their dollar holdings: the $691 billion capital outflow number in all likelihood would become much larger.

In these circumstances, maybe you want to hold dollars. I do not.