Countries' Self-Interest Distracts From Economic Cooperation at The G20 Summit

Marc Chandler writes in The Street, that the G20 Summit is displaying a theme of national self-interest that will stand in the way of solving global issues. While some countries are supportive of QE2 as a way to stimulate the world economy, others are critical, including Russia who suggested that the Fed should consult other countries before making important decisions. See the following post from The Street. 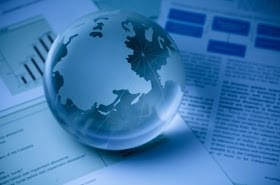 The G20 heads of state meeting is at hand. Expectations have fluctuated, but remain low as there appears to be little basis for a major agreement. Platitudes about reform of the international monetary architecture or readdressing global imbalances may be issued, but real action will be elusive.

There are two reasons for this assessment. First, countries are dealing with domestic challenges that are mediated by the constellation of domestic institutions and the political and economic culture. Second, there is no agreement on how to define the global challenges, let alone a shared understanding of the causes and dimensions of the problems.

Americans are taught in civics classes that World War I was about making the world safe for democracy, and WWII was about defeating fascism. There was also something else going on. By the early 1900s, the U.S. and Germany had surpassed Great Britain in various key measures of power such as steel output and military might. In some respects, or levels of analysis, the Great War was about who was going to replace Britain as the hegemonic power.

One theory of international relations, "hegemonic stability theory," holds that international stability is more likely to be achieved when there is one country that exerts global leadership. With a preponderance of power, it will use various channels, from moral suasion and diplomacy to coercion and arms to set and enforce the international order.

The U.S. is a status quo power. It is the hegemon. The basic institutions of Pax Americana are the IMF, the World Bank, the United Nations and the WTO (previously GATT). And because these organizations are based on a rule of law and have various democratic elements, even if not fully representative, the U.S. not only does not dictate the agenda or outcomes, but its interests are often ruled against. There have long been friends and foes that were critical of U.S. hegemony and envious of its power.

Yet since the collapse of the Berlin Wall and the collective suicide of the Soviet Union, there has been no alternative to U.S. hegemony. No country or group of countries could really challenge American hegemony. Ironically, that was some high water mark.

The combination of the wars in Iraq and Afghanistan and the severe financial crisis has weakened the hegemon. At the same time, the new key development in the world is the rise of China, which has been happening in earnest since the late 1970s, but reached critical proportions only in the past decade. This fact is likely to shape and define the next quarter of a century or more.

China has joined the basic institutions of Pax Americana, but it is not a status quo power. Its officials recognize China is not ready to be the hegemon itself, but is strong enough to counter U.S. influence. This is especially true because other countries, with their own grievances, can coalesce around China, which also has fairly open purse strings in a period in which deficit and debts problems abound.

The U.S. still provides important global leadership, and it cannot be dictated to. The idea suggested by Russia that the Federal Reserve should consult others before making an important monetary policy decision is comical. Leaving aside the great experiment in Europe of monetary union without political union, the demand is unreasonable and unprecedented.

Some media reports suggest that criticism of the Federal Reserve's QE2 is growing. To the contrary, the criticism peaked prior to the G20 meeting. Market events, including a sharp rise in the dollar and the backing up of U.S. interest rates, would seem to blunt criticism (though not from this author) that the opposite was going to take place.

In addition, recent comments from European Central Bank President Jean-Claude Trichet acknowledging that the intent of QE2 was not to drive the dollar down, but to stimulate the world economy, were supportive. The Bank of Canada's Mark Carney was also supportive, recognizing that stronger U.S. growth is in the world's interest.

German criticism seems the harshest. Finance Minister Wolfgang Schaeuble reacted fiercely, saying the Federal Reserve was "clueless." In fairness, the challenges the U.S. and the euro zone face are not the same, and their political and social institutions, which frame the issues, are not the same. It is hardly surprising there are different policy responses.

At the same time, the stridence of Schaeuble is likely, in part, a response to what was seen as an attack on Germany's interest by the U.S. proposal to limit current account imbalances to 4% of GDP, apparently sprung without notice by Treasury Secretary Timothy Geithner. There is little support for quantitative targets, but that was not really the point.

It is here, however, that the U.S. shows itself to be the upstart as China sides with Germany and the status quo. Keynes argued at Bretton Woods more than 50 years ago that the surplus countries (at the time only the U.S.) should bear a burden in the adjustment process, but the U.S. Treasury's Harry Dexter White successfully resisted. Now the U.S. takes up Keynesian arguments, and Germany and China take White's position.

The G20 heads of state meeting will not resolve hegemonic stability. It is part of the multi-dimensional, multi-faceted arena in which nation-states compete. Promises will be made and the intentions may be noble, but at the end of the day, national self-interest speaks loudest.

This post by Marc Chandler has been republished from The Street, a site covering financial news, commentary, analysis, ratings, and business and investment content.
Posted by: NuWire Investor @ 5:55 AM