Simon Johnson argues that while China bears some 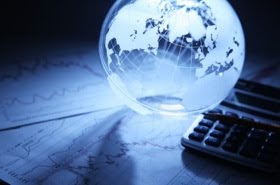 responsibility, the main reason that the world "is on the brink of a nasty confrontation over exchange rates" ... is ... Europe’s refusal to reform global economic governance, compounded by years of political mismanagement and self-deception in the United States."

But his main concern is not the prospect of a currency war, it's the stability of the world's financial system:

Who Caused the Currency Wars?, by Simon Johnson, Commentary, Project Syndicate: ...the US has run record current-account deficits over the past decade, as the political elite – Republican and Democrats alike – became increasingly comfortable with overconsumption. These deficits facilitate the surpluses that emerging markets such as China want to run...

Leading Bush administration officials used to talk of the US current-account deficit being a “gift” to the outside world. But, honestly, the US has been overconsuming – living far beyond its means – for the past decade. The idea that tax cuts would lead to productivity gains and would pay for themselves (and fix the budget) has proved entirely illusory. ...

When a similar issued emerged in the 1970’s – the so-called “recycling of oil surpluses” – banks in Western financial centers extended loans to Latin America, communist Poland, and communist Romania. That was not a good idea, as it led to a massive (for the time) debt crisis in 1982.

We are now heading for something similar, but on a larger scale. The banks and other financial players have every incentive to load up on risk as we head into the cycle; they get the upside (Wall Street compensation this year is set to break records again) and the downside goes to taxpayers.

The “currency wars” themselves are merely a skirmish. The big problem is that the core of the world’s financial system has become unstable, and reckless risk-taking will once again lead to great collateral damage.

Won't the recent resolution authority announced by the FDIC end the too big to fail problem and the moral hazard (excessive risk taking) that comes with it? It's not clear that it will:

This is the Republican strategy for beating back effective regulation: just claim that what we’re really doing is telling big banks, sternly, that there will be no more bailouts — they’re not too big to fail.

And then, when the next financial crisis arrives — well, it will play just like 2008. President Palin or whoever will find themselves staring into the abyss — and conclude that they have to bail out the financial sector anyway.

In a crisis, the financial system will be bailed out. That’s just a fact of life. So what we have to do is regulate the system to reduce the chances of crisis and the taxpayer costs when the bailout occurs.

In addition, attempts to come to agreement on international resolution authority have not gone well, and it's not clear that an agreement will be reached anytime soon. If banks will be bailed out in a crisis, then they have an incentive to take on too much risk, and strict regulation is needed to prevent that from happening.