Long-Term Charts Suggests That Silver Has Room To Grow

Jeff Nielson writing in The Street discusses what the long-term silver charts can teach us about where silver prices may go in the future. Keeping in mind the inherent flaws in technical analysis, the charts suggest that silver could go significantly higher. See the following post from The Street.

Regular readers will know that I shun short-term charts and "technical analysis." Such tools carry a low degree of reliability, since they are built upon numerous false assumptions (beginning with "free and open markets" and "perfect information"). I submit to readers that markets have never been less free and open, and information has never been so far from perfect.

Long-term charts, on the other hand, are an entirely different matter. The much, much higher level of reliability which is provided by a longer time horizon is a powerful compensating force vs. the margin of error caused from using flawed assumptions. Relying upon superior tools inevitably means greater clarity when analyzing any particular market.

In the case of silver, when we begin looking at longer-term charts, there are a few obvious facts which leap out at viewers, and some which are perhaps not so obvious. To begin with, unlike almost any other market, silver never goes sideways. It is either moving strongly upward, or strongly downward -- reflecting the "struggle" between market-rigging bankers looking to keep silver grossly under-valued, and the even more powerful force of supply-and-demand. 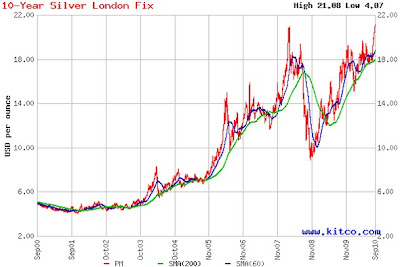 While such fundamentals can be temporarily negated through artificial intervention in markets, over any longer time horizon, such manipulation must fail as a simple matter of arithmetic.

Price any good too high, and eventually demand will collapse to a level which forces the price down toward its natural equilibrium. Under-price any good, and demand will relentlessly devour supply -- until the imbalance crushes anything and everything seeking to suppress that price.

Sadly, few bankers have any understanding of statistics and only a glimmer of understanding when it comes to supply and demand. They chuckle to themselves when their own relentless, brute-force manipulations give them short-term victories in driving the price of silver (and gold) to some ridiculous level -- totally failing to understand that the more they succeed over the short-term in these minor "battles" the sooner and more-total will be their defeat in the "war," since they are fueling demand while simultaneously obliterating supply. 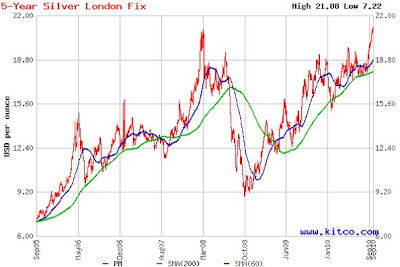 Getting back to the charts, we see that this endless power-struggle has resulted in perhaps the most-jagged chart one will ever see with respect to a major commodity. However, if we look a little closer, we see that occasionally this very jagged line smooths out - and when it does, it means that silver is heading straight up or straight down. 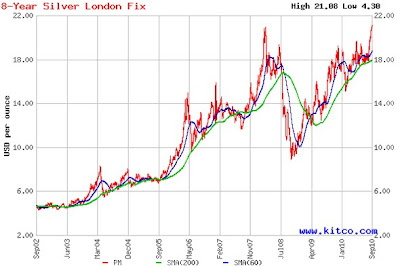 By itself, this observation is not tremendously helpful, as we only know that silver has made a "smooth move" after some leap higher or lower, with no guidance as to whether any particular strong move will continue. What is more helpful is to note the striking similarity between two, major trends - which are visible when looking at the eight-year chart for silver.

From that peak in March of 2008, silver plunged to an even more dramatic bottom of $9/oz, in October of 2008. This collapse of nearly 60% was roughly twice as large in size, and nearly four times as long in duration, compared to the plunge in May 2006. Again looking at the eight-year chart, we see the build-up to the dramatic spike in silver in January of 2008 (and the smooth-ride to $21) looks very similar to the current period starting in October 2008 to the present --except this formation is obviously much bigger.

If we assume that this long-term pattern is about to repeat, we are presented with two price-targets in silver. If we compare the peak-to-bottom move from May/06 to July/06 to the move from March/08 to October/08 (and note that the move was nearly twice as large), this implies a subsequent ascent of almost twice the distance of that 110% move. This would lead us from $9/oz to about $27/oz.

The second period of comparison is to look at the "smooth ride" silver had from January to March of 2008, where it advanced roughly 50% -- and which looks very similar to the current advance. If we project this spike to be nearly twice as large as the spike at the beginning of 2008, it takes us from just under $18/oz to close to $35/oz. If we average these two comparisons, this puts us at about $31/oz.

I once again caution readers that given the inherent flaws in technical analysis and the imperfections of our current markets that we should never blindly (and boldly) plunk down our money solely on the basis of what the charts say. However, for those investors who have already decided that they want to begin or add to a position in silver, what the charts suggest is that silver's current bull run is a long ways from being over.

This post by Jeff Nielson has been republished from The Street, an investment news and analysis site.
Posted by: NuWire Investor @ 5:53 AM