According to Moses Kim, Krugman’s blind faith in the Keynesian multiplier has led him to support additional government stimulus to solve the US’s weakening economy. However evidence suggests that Obama’s previous stimulus program had little effect in reducing the unemployment rate and stimulating economic recovery. See the following post from Expected Returns.

Anyone who reads this blog knows that I think economists are useless as forecasters. When economists in unison were cheerleading a mythical recovery last year, I was one of the few people consistently deriding them and telling people to wait for them to be proven wrong. Given enough time, the truth always reveals itself.

The current head Keynesian cheerleader is Nobel Prize winning economist Paul Krugman. In a recent CNBC interview, Krugman calls for another round of stimulus while claiming that the initial round of stimulus had the effect that he expected. It was at this point in the interview that I entered a state of shock; my memory is quite clear that Krugman was one of the prime supporters of government stimulus.

Let me provide some background. If you recall, the Obama administration provided a chart last year with their unemployment projections both with and without the stimulus plan. Here's the chart: 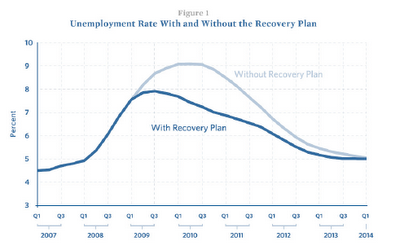 Of course this chart, which projected unemployment would be 7% by now, currently serves as comic relief. However, there were actually people who believed the government's projections, including Paul Krugman himself. Here's an excerpt from an article of his, Romer and Bernstein on Stimulus, in connection to the chart above:

Kudos, by the way, to the administration-in-waiting for providing this — it will be a joy to argue policy with an administration that provides comprehensible, honest reports, not case studies in how to lie with statistics.

That said, the report is written in such a way as to make it hard to figure out exactly what’s in the plan. This also makes it hard to evaluate the reasonableness of the assumed multipliers. But here’s the thing: the estimates appear to be very close to what I’ve been getting.

In Krugman's defense, he did say that Obama's stimulus plan wasn't enough. However, this doesn't change the fact that his economic projections based on the stimulus plan were more or less the same as the government's projections. In other words, he was way too optimistic in forecasting the effect of Keynesian stimulus.

Some of Krugman's arguments defy common sense. In this interview, Krugman provides his support for government boondoggles with a straight face. How Krugman can acknowledge, and in fact, encourage waste of this kind while believing in the Keynesian multiplier is beyond me. When the leading economists in our country have no idea what they're talking about, you know we're in trouble.