Do Higher Taxes On The Rich Hurt Growth?

Economist Victor Claar says that higher taxes on those making over $250,000 may reduce long-term growth by discouraging effort, invention and discovery. Economist Mark Thoma points out that there is no reliable evidence that the returning to the past tax structure will hurt growth. See the following post from Economist's View.

Here we go again. Whenever there is discussion of raising 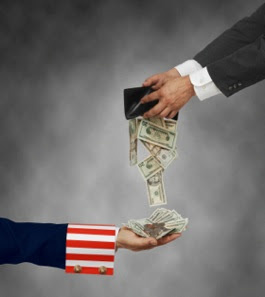 taxes on the rich, the inevitable the charge that people in favor of raising taxes are suffering from "envy" of the success of others is levied. The argument is that the envious don't know what's good for them -- if the policies they favor are enacted, they will only hurt the economy and themselves. Further, the argument states, it's a mistake for the envious to suggest that "those making over $250,000 should feel guilty for the hard work they have done." You know, like the hard work Ben Stein did to inherit money from his parents:

Greed may not be good for the economy, but envy is worse, by Carlos Lozada, Commentary, Washington Post: ...[I]s greed capitalism's worst sin? Not so, argues economist Victor Claar. In a speech at the American Enterprise Institute last week, Claar posited that another deadly sin -- envy -- is an inherent part of the free-market system and can prove even more insidious.

Claar, a co-author of "Economics in Christian Perspective," relied on Thomas Aquinas's definition of envy: sadness at the good of another. He cited the biblical parable of the prodigal son, in which the older sibling is envious of his dissolute brother, whose return home sparks a big party. "It sounds like blue-collar frustrations that we hear today," Claar said. " 'I did everything the right way, I played by all of the right rules -- and here I am.' "

Whether because of differing intelligence, skill, ambition or luck, free markets produce different outcomes for different people, so envy is inevitable. And in democratic systems, "envious majorities" can push for policies that "narrow the gap between them and the targets of their envy."

But Claar worries that this road can lead to initiatives that, "in the guise of social justice," produce greater unemployment or less overall wealth. And those results in turn lead to "outrage at the system that generated the outcome."

Was Claar talking about President Obama's policies? "The current administration does seem to be keen on taking from the rich to give to the poor," he said in an e-mail. "Sometimes the tone is not mean -- 'spread the wealth around' -- yet at times it is, suggesting those making over $250,000 should feel guilty for the hard work they have done to contribute something others find valuable enough to voluntarily pay for. So our efforts to reduce envy may very well reduce long-term growth by discouraging effort, invention and discovery in the most talented among us." ...

Several points. First, the implicit assumption here is that the existing tax distribution is fair, and any deviation from the present distribution would be unfair to the wealthy. But why is the present tax structure more equitable than another? That question is not addressed, but there are plenty of reasons to believe that equitable taxes require a progressive structure. Whether it's too progressive or not progressive enough is worth asking, and I think a more progressive structure is quite consistent with equity -- partly for the reasons I'll outline below -- but the point is that there is nothing that says the current distribution is necessarily correct (and economics cannot speak to equity).

Second, there is an efficiency argument made in defense keeping taxes where they are. The argument is that if we raise taxes on the wealthy to levels where, in the past, growth was robust, it will harm growth. But at the tax rates being discussed presently, there's no reliable evidence that this is true. It's asserted to defend the existing tax structure, the 'you don't know what's good for you' defense, but again there is no basis for this assertion.

Third, the argument is that the wealthy deserve the income they receive as a reward for their for their skill, ambition, intelligence, hard work, and the resulting contribution to the social good. Consider, however, that most of the gains in recent years went to the financial industry, and mostly to the very, very top, and that the social gains from a huge financial meltdown and subsequent recession are hard to see. From this perspective, the efficiency argument rests on pretty shaky ground.

Fourth, the idea that incomes have nothing at all to do with inheritance and privilege, monopoly power, cronyism, and the like is not defensible. To the extent that higher taxes are clawing back unearned gains, as they do, there is nothing inequitable or inefficient about it. If anything, we are clawing back too little, not too much.

People aren't envious, they are frustrated and furious with a system that causes them to lose equity in their homes, have their retirement funds evaporate, have their employment prospects plummet, while at the same time bailing out those at the top who caused the problems. It's not envy, it's a plea for social justice, a plea for they typical household to get the same consideration as the wealthy on Wall Street. Just look at how quickly Washington moved to bailout Wall Street, and how much reluctance there is to tackle the unemployment problem. The argument is that it was necessary to save Wall Street to avoid an even bigger meltdown and a worse outcome for Main Street, and there is something to that, but the rewards could have been distributed differently. And if the ultimate goal was to help Main Street, why not offer more help directly instead of through a "help the big players and hope it trickles down" approach?

Most people do not begrudge income that is earned no matter how high that income is, but when it's clear that forces other than reward for hard work and contribution to the social good are behind the distribution of income, that's a different matter. When some households are struggling mightily just to keep up, let alone make gains, while others are rewarded in excess of their contribution to the social good, it's no wonder that people sense the system is set up to work against them, and that they are angry and frustrated with it.