Reasons Why Deflation Is Not A Threat

Moses Kim lays out his argument for why deflation is unlikely to hit the US in the near future. He points out that deflationists are missing the mark with their assertion that the dollar will increase in value and are discounting the ability of the government to fight deflation. See the following post from Expected Returns.

Based on the comments and emails I'm receiving lately, it appears more and more people are hopping on the deflation bandwagon. These correspondences have exposed to me an obvious misunderstanding of basic facts. While I suppose I am an "inflationist", I'm the first to admit that deflationists have some valid arguments to support their claims. But at the end of the day, their arguments are flawed; I just don't see deflation as a realistic threat moving forward.

There is a constant tug of war between deflation and inflation that hinges on factors such as money supply, credit, interest rates, and inflation expectations. While these variables push inflation in either direction, there is undoubtedly one variable that swings the odds decisively in either direction, and that is the dollar. There can be no sustainable deflationary trend with a falling dollar any more than there can be an inflationary trend with a rising dollar.

So let's get one thing out of the way. Deflationists are saying that the dollar will rise in value, and based on some of the doomsday asset collapse projections I'm hearing, quite dramatically. Now if this isn't already ridiculous to you, I'll examine some of the factors that will make a sustainable rise in the dollar unlikely. To do this, we must explore the last great deflationary period in the U.S, the Great Depression.

Below I will present some things to take away from the Great Depression. These factors are critical to understanding why a deflationary collapse is unlikely to occur based on present-day conditions.

During the Great Depression, farmers accounted for nearly half of labor. The maturation of the American economy from an agrarian to industrial economy created a staggering level of unemployment, which was deflationary. The Dust Bowl of 1933 obviously exacerbated the problem and put pressure on wages.

However, from 1933-1936, the second phase of the Great Depression, unemployment declined from 25% to 11%. Spending power reappeared, as evidenced by a spike in real final sales. Deflation? I don't think so. 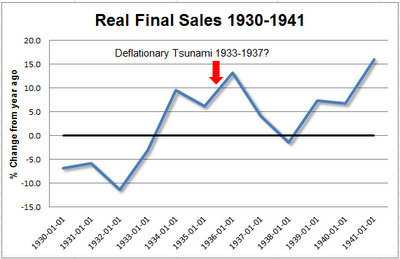 The 1930's were characterized by mass defaults across Europe stemming from a sovereign debt crisis. Defaults were directly correlated to debt to GDP ratios and the percentage rise in budget deficits in preceding years.

The psyche of Europeans was obviously scarred due to world wars, revolutions, and constant conflicts. As soon as sovereign nations started to default, capital sought safety. The U.S. was one of the few countries that remained on a gold standard, so capital flooded into the U.S. dollar, which for all intents and purposes was as good as gold. So the rise in European defaults activated a temporary flood into the U.S. dollar (aka gold) in 1930-1931, which created the sensation of deflation in America. In effect, the deflationary trend was accelerated by the concentration of capital in U.S. dollars.

As soon as FDR was inaugurated he took us off the gold standard, which immediately devalued the dollar and sparked an inflationary trend. This created a spike in asset values that was most notable in stocks. There was some semblance of a recovery, but it was short-lived because of flawed government intervention. But that's a story for another day.

Anyway, how many deflationists will tell you that CPI rose from 1933-1937? I'm guessing none. But sure, go ahead and listen to the deflationists who take a chart of the Dow in 1931 and plot it against a 2010 chart and predict a stock market collapse. Absolutely. Utterly. Ridiculous. 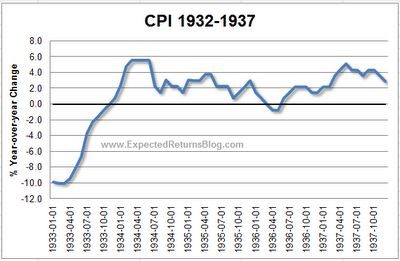 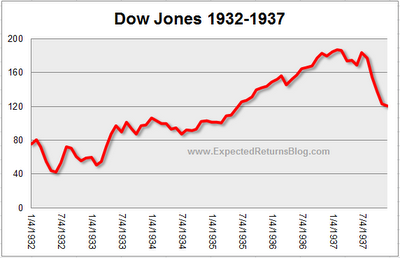 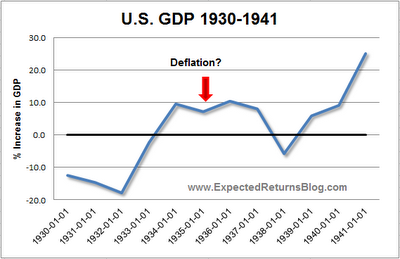 Deflationists constantly conflate debt destruction with deflation while forgetting one tiny fact: The government has a technology called the printing press. A determined government can easily fight deflation. We already got a glimpse of how the government can counteract the forces of deflation by handing out free money in the form of homebuyer tax credits. The spike in sales of homes spurred by tax credits confirms that you can manipulate behavior by giving out free money. This proves beyond a doubt that a determined government can create price distortions.

The most important point I am going to make is this: The coming inflation will result from a loss of confidence in government. A massive deflationary collapse can only occur if: a) our Federal government resorts to full-scale austerity measures (unlikely); b) Americans hoard dollars (unlikely); and c) there is a rise in the value of the dollar that evidences a rise in confidence in government (impossible).

I urge you to consider the aforementioned arguments and stop listening to deflationists. I will add the caveat that there will be huge moves in the dollar in both directions. In other words, we can experience temporary bouts of deflation. But to predict a drawn-out deflationary collapse is just ludicrous. A 90% decline in stocks is ludicrous. So is a 90% drop in real estate. The odds are heavily tilted against those things happening for the reasons I outlined above. The only real threat is inflation- about this I am sure.