A breakdown of the unemployment numbers showed that the private sector gained 71,000 jobs to offset the 143,000 temporary census jobs that ended in July. The first decline in temporary workers in 10 months is a negative indicator for future job growth. See the following post from The Mess That Greenspan Made.

The trend in jobs suggest a weakening job market and a decline in temporary workers is a negative future indicator. See the following post from The Mess That Greenspan Made.

The Labor Department reported that nonfarm payrolls fell 131,000 in July after a downwardly revised loss of 221,000 in June, largely due to government Census workers being let go. The private sector added 71,000 jobs and the unemployment rate held steady at 9.5 percent. 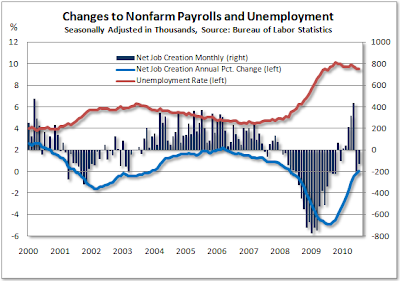 Revisions to the June data were large, the originally reported loss of 125,000 jobs revised downward by almost 100,000, primarily due to changes in government payrolls, however, the May total of +433,000 reflects only a modest upward revision of 1,000. The direction of the data revisions, often viewed as a leading indicator, now point to a weakening job market. 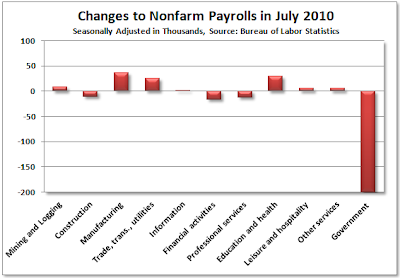 Manufacturing saw strong hiring in June, up 36,000, and the health services industry added its typical share of new workers, up 27,000, but temporary hiring (part of the professional services group) fell for the first time in 10 months, down by 5,600.

Since temporary hiring is considered a leading indicator, this does not bode well for future full-time hiring. In fact, the professional services category also saw net job loss for the first time in almost a year, down 13,000, after adding more the 300,000 jobs since last October.

The U-6 underemployment rate (including marginally attached workers and those settling for part-time work instead of full-time work) held steady at 16.5 percent in July and there were a total of 14.6 million people looking for work in what has to be considered a roundly disappointing report.