How Banks Profit From The Slow Economy

Economist Andy Harless suggests that in some ways, banks benefit from the depressed economy which may explain the lack of activity by the Federal Reserve. Americans are keeping their money in banks rather than investing, providing banks with cheap capital that they can use to buy Treasury notes for easy profits. See the following post from Economist's View.

I know how much some of you will disagree with thi 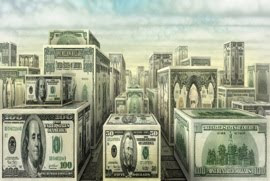 s, but I have a hard time ascribing bad motives to people at the Fed and using it to explain policy decisions. I think people at the Fed believe in their heart of hearts that they are doing what's best for the economy as a whole as opposed to what's best for a particular party or some small group of people pulling the strings, but they are relying on bad assumptions, questionable models, convenient interpretations, etc. To me, some of the beliefs held by the other side are astoundingly unbelievable, but they would, of course, say the same thing about me. I don't deny that those beliefs can be convenient for the person holding them, but the idea that people at the Fed are consciously holding down the larger economy in order to benefit Republicans or some group of people is hard for me to buy into. There are certainly ideological divides that lead the other side to policies that I think are misdirected, or even counterproductive, but the bad motive explanation is hard to swallow. I'm more inclined to think this goes on in Congress where to some, winning the election is the only thing, but even then it's hard to assert this as a general proposition. But perhaps I have too much belief that people mostly try to do the right thing, and I am hopelessly trusting and naive (though see here). I expect to be told that I am.

The Real Activity Suspension Program, by Andy Harless: (Think of this as a guest post by the Cynic in me. I’m not sure my Cynic is entirely right on either the facts or the economics, but he has a provocative point. And I apologize for the fact that he misuses the word “recession” to include the period since our inadequate recovery began.)

Americans got angry when the federal government tried to bail out banks by buying assets or taking capital positions. Whatever you may think of those bailout programs, they at least had the advantage that taxpayers were getting something in return for their money. There is another bank bailout program going on now – one that allows the federal government to recapitalize banks with public money, receive nothing at all in return, and somehow escape criticism for doing so. That bailout program is called the Recession.

How does the Recession allow the government to bail out banks? With the recession going on, people are afraid to do anything risky with their assets, so they keep them deposited in banks, earning no interest. Banks can then invest these deposits in Treasury notes and credit the interest on those Treasury notes to their bottom line, thus improving their balance sheets. So the government pays to recapitalize banks while receiving nothing in return.

Now this bailout program is not without its risks. The biggest risk is that the economy will recover, which would be a disaster for the program. Suddenly, not only would banks be holding losses on their Treasury notes, but their cost of funds would go up, as depositors realized that there were more attractive investments available than zero-interest bank deposits.

Finally, there is reinvestment risk. Treasury notes mature and need to be rolled over, the coupon payments need to be reinvested, and banks have new inflows of funds that need to be invested. A substantial decline in the yields on Treasury notes (perhaps a continuation of what we are seeing now) would benefit banks in the short run because of the capital gains involved, but ultimately it would effectively terminate the bailout program, since banks would no longer be able to earn a large spread on their safe investments.

So the success of this bailout program depends on avoiding recovery, avoiding increases in inflation expectations, and avoiding major declines in Treasury note yields. Now do you understand why the Federal Reserve Bank presidents – representatives of the banking sector – are the most hawkish voices at the FOMC’s policy meetings?