Are Policymakers Being Too Reactive To The Economy?

Economist Mark Thoma worries that policymakers are waiting too long to take action to help an economy that needs help. He describes policymakers as being reactive rather than proactive, which may result it taking much longer for the economy to return to full employment. See the following post from Economist's View. 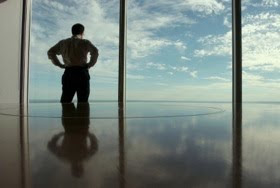 Can Government Help with Structural Unemployment?

I answer yes. I also wonder why we seem to have forgotten about the lags in the policy process:

Policymakers keep making this mistake. Things look tenuous -- and there are plenty of worrisome signs right now -- but then they make excuses, adopt rosy scenarios, and find other ways to wait until they actually see the bad outcome before moving to action. It's like covering yourself up after the blow. Or saying you'll close the barn door if you see the horses running toward it. Who'll get there first? There's plenty to suggest that we need to insure against the chance that things get much worse right now. In any case, we need to try to offset the problems we already have. But yet, there's no action. It's frustrating to see conditions so bad, with signs they could get worse, and have no sense of urgency from policymakers.

Most of the good news on the economic front lately has been about stopping the decline we were in. Presently, we're stuck at the bottom of the valley, and have been for some time now.

Imagine the Sacramento Valley (it's very long north to south, fairly narrow east to west by comparison). We have fallen down one side of the valley, that is the slump, and are now at the bottom (hopefully). The question is, are we traveling east to west so that we'll hit the other side relatively soon, or are we moving north to south with a long, long trek ahead of us before finally climbing back up to full employment? My fear all along is that without more help from policymakers, it would take a long time before reaching the other side of the valley. And unlike what a traveler might prefer, the other fear is that once we finally get to the other side, the climb out of the valley will be a slow and gradual one rather than a steep ascent.

Part of the problem is surely structural, but there's also a large, cyclical component to our present problems. In either case, the economy needs more help.