Will We See More Quantitive Easing From The Fed?

Paul Krugman says that the Federal Reserve deserves an "F" for their failure to increase employment or stabilize prices. Bernanke's comments have fueled speculation that the we will see further quantitative easing by the Fed. See the following post from The Mess That Greenspan Made.

Despite yesterday’s somewhat sanguine view, if 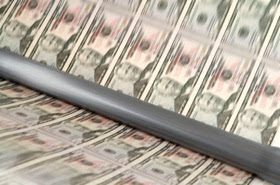 Federal Reserve Chief Ben Bernanke really thinks that the U.S. economy is headed for serious trouble due to various traps that have been encountered (said traps having previously been set by the deflation and/or liquidity monsters), he has more company with each passing day. Earlier today in “the land of deflation”, one former Fed head lent his support to this view as reported by Reuters.

Former Federal Reserve board member Lawrence Lindsey said on Thursday it will be “obvious” by the end of this year that the U.S. economy has entered a “deflationary trap.”

“We know from (Fed) Chairman (Ben) Bernanke’s recent comments that it is now at least a concern … By the end of this year I think it will be quite clear,” Lindsey said in an economic forum in Tokyo.

“I would expect by December we will see further quantitative easing” by the Fed, he said.

Paul Krugman sketched out the situation for Bernanke creating a new “Fed misery index” that he chose to call a “Fed fail index” since he figures the central bank deserves an “F” for the job it’s been doing in achieving full employment and stable prices.

Like many others in recent years, this discussion again strikes me as something that historians will look back upon in a few decades and wonder, “What were those guys thinking? They run an economy on asset bubbles for twenty years and then they wonder why normal monetary policy doesn’t work any more.”