Will Gold Be A "Flight To Safety"?

As the global debt crisis continues to impact economic recovery, analysts believe it will only be a matter of time before governments once again turn to a stimulus strategy to try and save things. Eventually the mounting debt will result in a revaluation that will negatively impact both the equity and bond markets - leaving gold to soar as investors seek safe haven. See the following post from Expected Returns.

As we approach the final resolution of t 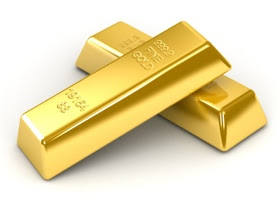 he global debt crisis, panic-driven capital will flow into bonds, the U.S. dollar, and gold. This is a temporary trend. Eventually bonds and the U.S. dollar will crater while gold rises to new highs. This is the long-term trend.

The amplitude of moves in these assets will increase with time, since what starts as a trickle usually ends as a flood. Capital is just starting to selectively seek harbor from the oncoming tsunami; we haven't come close to experiencing the type of feedback loop that evidences human emotion has entered the picture. When panic arrives this time around, I believe it will give volatility a whole new meaning.

The flight to safety is a reflection of the growing realization that a broad-based debt repudiation is coming. This shouldn't be a surprise- sovereign nations never repay their debts. We are getting a history lesson in real-time, but most people have no clue.

We've already tried the Keynesian elixir of debt-financed stimulus to no avail. The global economy is clearly starting to roll over as Keynesians scratch their head in confusion. Now what, more stimulus? More debt?

We can stimulate all we want, but it will have no effect. Unfortunately, another round of stimulus is most likely coming. Take this as a sign of desperation. Our genius leaders will never figure it out: we need to revalue, and we will revalue.

The relationship between asset classes and the flow of capital will give you a glimpse into the mentality of investors. Once we put in a low in stocks in March 2009, gold and stocks rose while bonds sold off. Risk trades came on the table, and the dollar was the prime driver of all these trends.

In the past couple of months, gold and bonds have risen with the dollar while stocks have rolled over. The shift of relationships, reflected by the rise of bonds with the market in April, was a warning of things to come. It was a sign that fear had covertly entered the system. Gold was no longer an anti-dollar trade; it was a "flight to safety" trade.

Bonds and gold are currently tied to the hip. Investors still need to figure out what is happening. Eventually they will. Bonds will fall while gold rises as the sole "flight to safety" trade.

Commodities across the board peaked in April, signaling the weakening momentum of the economic recovery. Meanwhile, gold has continued its inexorable rise to new highs.

Bells should be ringing inside people's heads, but they are not. Those who view gold as a commodity are looking for some kind of reversion to the mean. They will short gold because they can't read the writing on the wall. And they will get slaughtered.

Eventually investors will realize the finances of the U.S. have reached the point of no return. This will coincide with a loss of confidence that will spur a sell-off in the dollar and bonds. In reality, a revaluation of the dollar is pretty much our only option. This is negative for bonds. All of the capital that blindly fled to bonds will go to gold, which will fuel a rally that will be amazing.

This post has been republished from Moses Kim's blog, Expected Returns.
Posted by: NuWire Investor @ 5:49 AM