There Is A Good Chance Of An Economic Double Dip

Peter Morici from The Street writes that the government has few tools left to stimulate the economy, which has an outlook for mediocre growth for the rest of the year. Morici thinks that there is a good chance of a double dip, especially if Greece reschedules and sets off a sovereign debt contagion or if there is a jump in the trade deficit. See the following post from The Street. 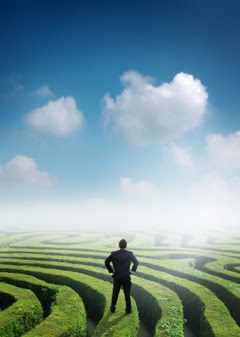 It's the season for economic forecasts and I have been polled by several published surveys. Like other forecasters, I see growth too weak to create enough jobs to pull down unemployment; private sector jobs could even stagnate. The risk of a double dip is at 50%. If that happens, the economy likely will stay down for many years.

Generally, the outlook is for mediocre growth -- a tad less than 3% and far less than the 4% to 5% needed to appreciably dent unemployment.

President Obama should not boast progress from the recent decline in the unemployment rate because a good deal of that was accomplished by folks throwing up their arms and quitting the labor force -- unemployed adults that stopped looking for work altogether.

Retail sales are weakening despite a lift from lower gas prices. This indicates second-quarter growth in consumption, which is about 70% of gross domestic product, is slowing from its modest first-quarter pace.

Second-quarter investment will get a lift from a modestly stronger manufacturing sector, especially in autos and technology-related equipment. Bellwether Intel(INTC) reports strong sales for the enterprise applications -- businesses have finally followed consumers in updating essential hardware. Otherwise investment will take a hit from much weaker new-home sales and construction; the nation has a serious overhang of housing units that will take some years to work off. Third-quarter housing construction should improve, and the recent dip in sales is an overreaction to the end of the homebuyer tax credits.

Overall, federal policymakers' policies have few arrows left in their quills. Federal stimulus spending remains controversial and unlikely to expand because voters are wary of more deficits and borrowing (which must come from the Middle East and China), and Christina Romer continues to issue outrageous, ill-founded claims that the stimulus package is generating up to 3.5 million jobs, eroding President Obama's credibility.

Moreover, thanks to Rahm Emanuel and Nancy Pelosi, the $787 billion stimulus was structured to maximize the president's image with environmentalists and pay off constituents. Jobs creation was a secondary consideration. Obama got what he paid for -- love from the left and too few jobs for middle America.

The Federal Reserve cannot lower short-term rates -- those are already at near zero levels -- and it is doubtful that new purchases of mortgage-backed securities would do much. Mortgage rates are already very low. The overhang in the supply of housing requires that any immediate gain in construction and jobs accomplished by further subsidizing housing purchases, through tax credits or Federal Reserve intervention, will only borrow from sales and construction from a quarter or two into the future.

The Treasury has forsaken the third tool of monetary policy -- exchange rates -- by letting Beijing enforce an undervalued yuan.

The trade deficit is a huge drag on the U.S. economy, creating a growing hole in aggregated demand. It is a primary reason, along with the administration's lack of comprehensive action to address the woes of the 8,000 regional banks, that the economy cannot accomplish growth of 4% or 5% as it should when emerging from a recession.

The deficits on imported oil and with China account for nearly the entire imbalance. The president's energy policies don't fully exploit, by some long and considerable measure, the potential to substitute domestic energy for foreign oil. The president's failure to accomplish genuine exchange rate reform in China means that the U.S. will face a long period of mediocre growth that will only further increase the national debt, with too much held in China. Unemployment will stay alarming high.

The preponderance of risk in my forecasts and those of my colleagues -- the consensus of which are fairly similar to mine -- are to the downside.

China keeps saying it is preparing for slower growth but its exports keep rocketing with the missiles landing in the United States. Much of China's labor strife and consequent higher wages are concentrated in the factories of foreign-invested companies. It seems now that Honda(HMC) has taught Chinese engineers how to make cars, and Chinese automakers through government influence on unions are establishing a two-tiered wages structure --high wages for foreign companies and lower wages for domestics. Not surprisingly, this has drawn comment or attention from the ever apologetic for China U.S. Treasury or broader U.S. administration.

The chances of a double-dip recession are at about 50%. If the European Union patch for Greece and others holds and the U.S. trade deficit does not jump too much, then the economic expansion will continue in the United States, affected but not derailed by troubles in Europe. If Greece reschedules and sets off a sovereign debt contagion, all bets are off, grab a helmet and head for trenches. The same applies if President Obama's ill-conceived drilling bans and excessive emphasis on low-yield alternative energy sources and conservation options, and his continued tolerance of Chinese mercantilism, result in a jump in the trade deficit.

It simply would not take much to knock the U.S. economy off track.

The only thing that is certain is that Obama and his economic team will reference the mess left by President Bush and assume no responsibility for making things worse by a combination of all-too-political economic and energy policies and ill-advised actions on energy and China.

If U.S. growth continues near 3%, the stock market will recover and reach new highs -- the Dow Jones Industrial Average will rocket to 13,000 sometime in 2011. I remain bullish because 3% growth, plus strong growth in China -- even if only 8% -- is enough to boost the balance sheets and enhance the fundamentals under major U.S. stocks.

If growth languishes between 1.5% and 2.5%, equities will recover but that is about all. I don't see growth at less than 1.5% without a wholesale derailing of the recovery.

To some considerable measure the outlook is binary -- the patch in Europe holds or it doesn't.

This article by Peter Morici has been republished from The Street, an investment news and analysis site.
Posted by: NuWire Investor @ 5:58 AM