Reasons To Ignore Mainstream Media And Go Long On Gold

Moses Kim from Expected Returns suggests watching the bond market for signs of capital flowing into the gold market. He sees US bonds as a massive bubble while the government continues to pursue outdated economic thinking, reasons that support his advice to go long on gold. See the following post from Expected Returns.

There are certain periods of time in history when seemingly obscene prognistications are right. I 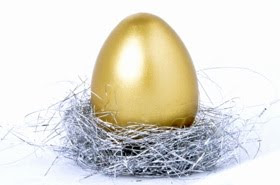 believe we are in one of those times. It is at times like these that "conspiracy theorists" (whatever that means) become what I like to call "reality theorists."

Economic shocks come from nowhere. One day the global economy is humming along; the next day it collapses. Crashes don't occur because the fundamentals suddenly change; they occur because the public at large recognizes the fundamentals and heads for the exit at the same time. What's crashing next is the public's confidence in governments across the Western world. You can guess how that will affect the price of gold.

If you study the bull market of the 1920's and the Great Depression of the 1930's, one of the amusing things you'll discover is how consistently wrong the mainstream was. During the great bull run of the 1920's, the mainstream was forever expecting a stock market crash. Remember, the decade began with a severe Depression (which incidentally came to a swift end without government intervention). The great Jesse Livermore was the only one who recognized the bull market very early on in the 1920's. He was mocked, but he was the only one making money for the longest time.

On the other side of the coin, the mainstream refused to believe that we were in for a prolonged period of economic weakness in the early years of the Great Depression. People were continually calling for a bottom in the economy. Of course the bottom didn't come for a decade.

So what gives? Why causes the mainstream to consistently miss the boat at key turning points? When does the risk/reward dynamic skew towards the seemingly insane- such as $3,000 gold?

Why Do People Miscalculate?

What we must realize is that economic orthodoxy is constantly changing. For example, it used to be common knowledge that interest rates rise in bull markets and vice versa; now the average investor believes the exact opposite. Back then, people feared the slightest rise in inflation; now the Helicopter Bens of the world are scared out of their mind of deflation.

So what causes people to miscalculate? It's pretty simply actually: Economists and investors alike fail to adjust their economic models to account for changing underlying conditions. They try to fit square pegs into round holes- then they scratch their heads and wonder what went wrong.

Our leaders haven't the slightest clue. They are using the same medicine to cure a different disease. Keynesian economics can work in theory if it were used sparingly and only in response to a true underutilization of productive capacity. But what we have on our hands right now is a debt crisis. Our leaders think they are geniuses curing the disease, when in fact, they are making it worse.

What amuses me is the brouhaha over Keynesian economic stimulus as if it arrived yesterday. Excuse me, but what do you call the last 50 years of American economic policy characterized by debt-financed consumption? Is it not Keynesian economics and has it not already failed?

I am a big believer that Pareto's law applies to markets. In other words, 20% of inputs will drive 80% of outputs. I honestly couldn't care less about productivity numbers because what's coming is no demand-pull inflation. I am much more focused on the dollar, bond rates, bond/dividend spreads, TIC capital flows, and the stupidity of governments around the world. Of all these variables, I am most confident in my prognostication that politicians will become increasingly foolish as the economic crisis on our hands becomes more complicated.

I have been preparing for the gold rocket launch for many months now. I am probably different from most people in that I focus more on the likely flow of capital than inflation when trying to figure out gold price movements. What I foresee is a flood of capital going from bonds into gold. The bond market is so huge that even a small percentage of capital flowing from bonds to gold will result in a volcanic eruption of epic proportions. So the potential rocket launch in gold depends largely on the bond market.

You all know where I stand. U.S. government bonds are the biggest bubble I've seen in my life. If you are trying to rationalize 10-year yields at 3%, then you are probably the kind of person who rationalized bubble home prices by using the "there's a fixed amount of land but a growing population" argument. In other words, your mind is stuck in the 5th grade. I advise you to think rationally for a second and consider the credit quality of a country that has to monetize its debt in the face of falling tax receipts and a stalling economy. Are you really on the right side of the trade going long bonds?

There will be monumental paradigm shifts in the years ahead. Everyone is asleep, but I think this is going to change fairly soon. The big changes, which will be evidenced by huge moves in gold, are still ahead.

Of all the precious metals, gold is the most popular as an investment.[1] Investors generally buy gold as a hedge or safe haven against any economic, political, social, or fiat currency crises (including investment market declines, burgeoning national debt, currency failure, inflation, war and social unrest). The gold market is also subject to speculation like most commodities, especially through the use of futures contracts and derivatives. Gold is also money, although it is treated by some investors as a commodity.