Government officials may be realizing something that the public sector has known for quite a while - hiring contractors rather than full-time employees can save a lot of money. With local governments being forced to reduce costs in the face of growing deficits, there will likely be a lot more government employees who will be replaced by contractors. See the following post from The Mess That Greenspan Made.

Given what has happened in the world over the 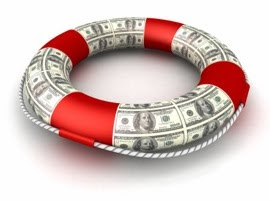 last few years – the last few decades, for that matter – it’s hard to imagine that reports like this from the New York Times should come as a surprise to public sector employees, many of whom are working on borrowed time.

Not once, not twice, but three times in the last two weeks, Andrew Quezada says, he was stopped and questioned by the authorities here.

Mr. Quezada, a high school student who does volunteer work for the city, pronounced himself delighted.

“I’m walking along at night carrying an overstuffed bag,” he said, describing two of the incidents. “I look suspicious. This shows the sheriff’s department is doing its job.”

Chalk up another Maywood resident who approves of this city’s unusual experience in municipal governing. City officials last month fired all of Maywood’s employees and outsourced their jobs.

While many communities are fearfully contemplating extensive cuts, Maywood says it is the first city in the nation in the current downturn to take an ax to everyone.

Maywood sounds like a very unusual place. Just south of Los Angeles with as many as 50,000 residents packed into just one square mile and a police force that sounds like it was completely dysfunctional before it was disbanded, bankruptcy was the city’s only alternative to letting all 66 city employees go.

Nonetheless, a growing number of people across the land are realizing that it makes little sense for the city worker mowing the courthouse lawn to be making $50,000 or more in wages and benefits when a contractor could do the same job for a fraction of the cost.

Well I rather a city worker make $50K a year "cutting grass" then having people who make millions from simply being able to catch a ball, act in a movies/TV, carry a tune, or any one who works in wall street that have no skills other than conning people. The more this country moves to privatisation the closer we become an oligarchy with out any rights unless you own shares.