Many policy makers seems to dismiss the need to address the large US debt, which Tim Iacono compares to the time when policy makers like Ben Bernanke dismissed the housing bubble. Tim Iacono thinks that economists and policy makers should be cautious about relying on the presently low borrowing costs reflected in the low 10-year Treasury yield. See the following post from The Mess That Greenspan Made. 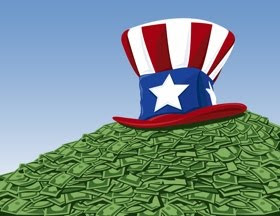 All this talk about how borrowing costs are so low that Washington couldn’t possibly be facing any sort of a debt crisis – that the 3.2 percent yield on the ten-year note is somehow a vote of confidence in policies coming out of the nation’s capitol – makes me think that, just as the insane fixation on a low consumer price index was a major contributor to the financial crisis, signals coming from U.S. debt markets are being similarly misinterpreted today and this may ultimately lead to an even bigger crisis in our not-too-distant future.

Misreading what these indicators are saying – or simply reading into them what one wants to believe instead – has led to bad policymaking before and is likely to do so again.

For a good example of this, one has only to look back to the middle of the last decade when the housing market was booming and economists across the land marveled at how the Federal Reserve had not only tamed the business cycle and kept prices low, but made nearly every homeowner wealthy to boot!

The central bank’s fixation on the green light being emitted by the consumer price index (and then, unbelievably, fear of deflation in 2002-2003 as home prices were rising at 10 or 15 percent a year) blinded policymakers to the flashing red light of an asset bubble that would meet its pin a few years later.

Similarly, the eagerness demonstrated by many elected officials in Washington to keep making that national debt clock spin faster and higher (with the blessing of most economists) while marveling at how little it costs to keep paying interest on the $13+ trillion tab could be setting the stage for a vicious cycle of sharply higher borrowing costs and even higher deficits.

When “freakishly low” interest rates approach more normal levels, just like when millions of overextended homeowners’ HELOC payments started to bite a few years back, Washington could have a major problem servicing the country’s ginormous debt.

Most policymakers dismiss this idea in 2010 just as they scoffed at the idea of the existence of a housing bubble back in 2003, 2004, and 2005 when something could be done about it.

Have a look at the now classic Bernanke was Wrong video at about the one minute mark where Maria Bartiromo asks the soon-to-be Fed chief about the worst case scenario if home prices were to drop precipitously:

I guess I don’t buy your premise. It’s a pretty unlikely possibility. We’ve never had a decline in house prices on a nationwide basis. So, what I think is more likely is…

What the Fed chief thought was more likely wasn’t even close.

Now, compare that to Nobel Prize winner Paul Krugman’s op-ed not long ago:

Right now, investors don’t seem at all worried about the solvency of the U.S. government; the interest rates on federal bonds are near historic lows…

Brad Delong went so far as to put up a chart of Treasury yields and ask readers:

Look at this and tell me that the U.S. federal government is running up against the limits of its debt capacity…

In both cases, indicators provided signals that economists and elected officials desperately wanted to hear – that inflation was low early in the last decade, so monetary policy was appropriate and borrowing costs are low today, so servicing the U.S. debt isn’t a problem – yet this thinking in 2005 proved to be horribly wrong, prompting the very reasonable question of whether something similar is going on today.

[Note: In one of the more disturbing developments over the last few years, despite overwhelming evidence to the contrary, most Federal Reserve economists have yet to concede that "freakishly low" interest rates were a major factor in the housing bubble's inflation and demise. This remains a very troubling issue for many reasons (not the least of which is that the interest rate pedal has been nailed to the floorboard again for the last year-and-a-half) but, for the purpose of this article, let's assume that "Fed policy" back around 2004-2005 also included the "hands free" approach to regulation and goading potential homeowners into taking the plunge by, among other things, denying the very existence of a housing bubble as detailed in this item earlier today.]

So, flash back to the first half of the 00’s and the relationship between home prices and the CPI (Consumer Price Index) was as shown below. Yes, there were a lot of other things going on at the time, but the government’s official measure of inflation was a major factor when central bank economists deliberated over whether short-term interest rates of one percent were appropriate. 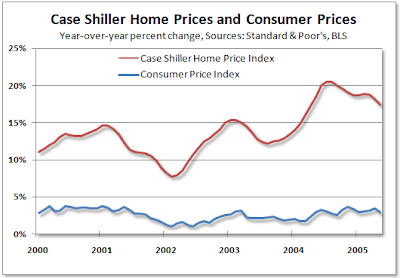 Stripped of anything that resembles home prices since 1983 when the costs of homeownership were replaced by the nefarious “owners’ equivalent rent” (see this 2007 item for more on that subject), as the housing bubble was reaching its maximum level of inflation, the vast majority of the nation’s top economists (and virtually all economists involved in policymaking) were much more interested in patting themselves on the back for a job well done rather than considering that the housing-neutered CPI might not be the only thing they should be watching.

Fast forward to today and you’ll hear similar arguments about the relationship between the nation’s growing debt and the yield that bond investors are demanding to hold it as shown below. The not-so-well trained eye of some of today’s crack economists look at this and conclude that, if anything, there is an inverse relationship between the level of U.S. indebtedness and interest rates – the more we borrow, the less it costs! 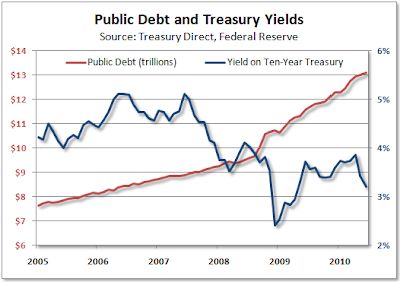 The world is awash in easy money and investors are scared to death!

Where else are wealthy nations, corporations, and individuals going to put their money in a global financial system that appears to be teetering on the edge of an abyss as it did before falling in back in late-2008?

Well, yes, they seem to be fond of gold lately, but there’s so little of the stuff around…

Over the last couple years, central banks and governments have been flooding the world with money in the mistaken belief that even more easy money will cure the problems created by the excessive easy money policies from a few years ago.

Naturally, doing the same thing and expecting a different result is no way to run a global economy, but that’s a discussion best left for another day.

Simply put, U.S. borrowing costs are so low because the rest of the world is so freaked out about what they see happening all around them and they can’t think of anything better to do with their money – not because they are blessing the large and growing U.S. debt!

Moreover, the fact that a lot of the most recent easy money is going from the Federal Reserve to big Wall Street banks and then right back to the Treasury Department to purchases U.S. debt (pushing prices up and yields down) should give great pause to anyone thinking that low U.S. borrowing costs are flashing a green light for more borrowing.

Are policymakers that stupid?

As for how the dismal science is being practiced these days, it sure would be nice if economists could factor “common sense” into some of their vaunted models, then they could dial in a little or a lot of it as they saw fit.