Moses Kim discusses the signals that suggest a pending double dip in housing including a growing inventory of REO homes. This trend is expected to continue as government stimulus for housing is winding down. See the following post from Expected Returns.

Existing-home sales rose again in April with buyers motivated by the tax credit, improving consumer confidence and favorable affordability conditions, according to the National Association of Realtors.

Existing-home sales, which are completed transactions that include single-family, townhomes, condominiums and co-ops, increased 7.6 percent to a seasonally adjusted annual rate of 5.77 million units in April from an upwardly revised 5.36 million in March, and are 22.8 percent higher than the 4.70 million-unit pace in April 2009. Monthly sales rose 7.0 percent in March. 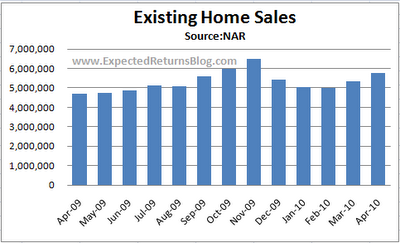 Total housing inventory at the end of April rose 11.5 percent to 4.04 million existing homes available for sale, which represents an 8.4-month supply at the current sales pace, up from an 8.1-month supply in March. Raw unsold inventory is 2.7 percent above a year ago, but remains 11.6 percent below the record of 4.58 million in July 2008.

Inventories have been on the steady uptrend, and this is very negative for housing moving forward. Only delay tactics from banks and tax incentives from the government have kept inventories from exploding. As REOs rise, we should see inventories increase considerably. 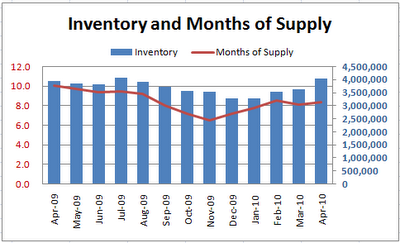 All the variables are in place for the double dip in housing to occur shortly. We have exhausted much of the buying power of potential homebuyers via government incentives, and the rising trend in inventories suggests supply and demand will meet at a lower price level.

This post has been republished from Moses Kim's blog, Expected Returns.
Posted by: NuWire Investor @ 5:48 PM