Governments Bailed Out Firms But Who Will Bail Out Governments?

The global financial crisis has reached a critical and dangerous phase, as governments which engaged in major deficit spending and stimulus are in financial trouble themselves. Still, economists caution that pulling back on stimulus before a full recovery is readily in sight may result in more short-term problems. See the following post from Economist's View. 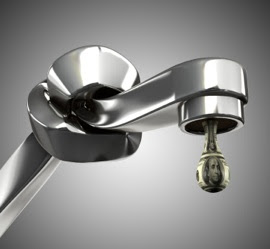 Return to the Abyss, by Nouriel Roubini, Commentary, Project Syndicate: ...History ... suggests that financial crises tend to morph over time. Crises like those we have recently endured were initially driven by excessive debt and leverage among private-sector agents... This eventually led to a re-leveraging of the public sector as fiscal stimulus and socialization of private losses – bail-out programs – caused a dangerous rise in budget deficits and the stock of public debt.

While such fiscal stimulus and bailouts may have been necessary to prevent the Great Recession from turning into Great Depression II, piling public debt on top of private debt carries a high cost. Eventually those large deficits and debts need to be reduced through higher taxes and lower spending, and such austerity – necessary to avoid a fiscal crisis – tends to slow economic recovery in the short run. If fiscal imbalances are not addressed through spending cuts and revenue increases, only two options remain: inflation for countries that borrow in their own currency and can monetize their deficits; or default for countries that borrow in a foreign currency or can’t print their own.

Thus, the recent ... global financial crisis is not over; it has, instead, reached a new and more dangerous stage. ... The progression is clear: first came rescue of private firms, and now comes the rescue of the rescuers – i.e., governments.

The scale of these bailouts is mushrooming. During the Asian financial crisis of 1997-1998, South Korea ... received ... $10 billion. But, after the rescues of Bear Sterns ($40 billion), Fannie Mae and Freddie Mac ($200 billion), AIG (up to $250 billion), the Troubled Asset Relief Program for banks ($700 billion), we now have the mother of all bailouts: the $1 trillion European Union-International Monetary Fund rescue of troubled eurozone members. A billion dollars used to be a lot of money...

Governments that bailed out private firms now are in need of bailouts themselves. But what happens when the political willingness of Germany and other disciplined creditors – many now in emerging markets – to fund such bailouts fizzles? Who will then bail out governments that bailed out private banks...? Our global debt mechanics are looking increasingly like a Ponzi scheme.

While the right medicine needed to avoid fiscal train wrecks is well known, the main constraint ... is that weak governments ... lack the political power and willingness to implement austerity. Political gridlock in Washington ... demonstrates the absence of the bipartisanship needed to address America’s fiscal issues. In the United Kingdom, a “hung” parliament has resulted in a coalition government that will have a hard time implementing fiscal discipline.

In Germany, Chancellor Angela Merkel lost a key state election after the rescue of Greece, and Japan has a weak and ineffectual government that seems in denial of the scale of the problem that it faces. In Greece itself, there are riots in the streets and strikes in the factories; in the rest of the PIIGS (Portugal, Ireland, Italy, and Spain),... political constraints may prevent fiscal austerity and structural reforms from being implemented.

As a result, “crisis economics” is likely to be with us for a long time. Indeed, the recent financial crisis is not over, and, worse, the medicine used to treat may have been partly toxic. It seems to have made the patient weaker and more addicted to dangerous drugs, as well as more susceptible to new strains of the virus that may, in some cases, eventually prove fatal.

When we are around six months until the economy returns full employment, it will be time to begin tightening both monetary and fiscal policy, but anything before that risks unduly slowing the recovery or even sending the economy back into recession. It's fine to plan what to do when the time comes, and we should begin doing that, but we need to avoid being overly anxious to begin reversing stimulative policy. The other thing is, since the main problem is rising health care costs -- the rest of the budget can be managed without much trouble -- it's not clear how we solve that problem right away in any case. There are certainly things we can do on the revenue side, and measures on the spending side such as ending wars would help as well. But the biggest part of the problem by far it the growth in health care costs, and that will take time -- and considerable political battling -- to resolve.

I'm not saying there's nothing to worry about, though things have been a bit better lately the political environment is generally fairly toxic, and it's not clear politicians are up to addressing the long-run health care challenge. But that doesn't mean we should begin pulling back on stimulus programs before the economy is ready. It wouldn't help much at all with the long-run problem, but it could cause considerable trouble in the short-run.