Moses Kim discusses the decline in the Case-Shiller housing index which suggests a weak impact from federal stimulus. Now that most of the government housing interventions have ended, foreclosures and increasing interest rates suggests prices will head lower. See the following post from Expected Returns.

Declining home prices in the 2nd half of 2010 are one of the things to look for to confirm that we are indeed in an ongoing Depression. Although the government has attempted to support home prices via temporary palliatives, the falling Case-Shiller housing index proves that the government has failed to pump life into the housing market. Don't look now, but the Case-Shiller index has fallen for 5 straight months on a non-seasonally adjusted basis. 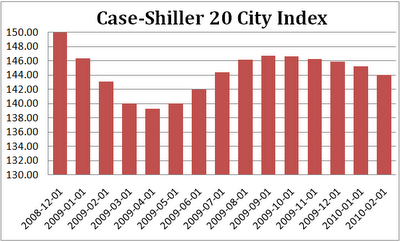 Housing prices are likely to remain depressed due to stubbornly high unemployment and stagnant wages. Without a backdrop of rising employment and rising wages, we must presume that home purchases are driven primarily by government incentives and not organic demand.

Positive seasonality factors coupled with homebuyer tax credits have incentivized banks to unload some of their shadow inventory. As banks start to unload their huge backlogs of inventory, the law of supply and demand suggests prices will head lower. This is especially true since the demand side of the equation has been exhausted by the mini buying frenzy at the tail end of the homebuyer tax-credit.

The final nail in the coffin for housing will be rising interest rates. Although the problems in Europe have created a demand for U.S. denominated debt, this is a temporary phenomenon. Traders are simply profiting from the predictable knee-jerk reaction of investors who flee to the "safety" of U.S. debt. In essence, they are speculating that a greater fool will relieve them of their trade at higher prices. No one worth their salt actually believes Treasury yields are justified at current levels. 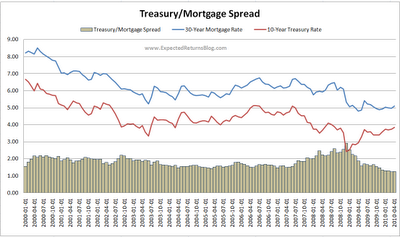 Now that the government is out of the MBS market, I expect spreads to widen from 1.25% to closer to 2%. The repricing of mortgage/treasury spreads to historical norms implies 6% mortgage rates at current treasury yields. In the current environment, 6% rates are good for another 10% decline or so in housing.

A decline in home prices will be the official indicator that this recovery has stalled. The consensus that housing has bottomed will be proven to be wrong. There are simply too many factors weighing down on housing. The only way I can see housing prices rise nationally is if we experience considerable inflation- which certainly isn't out of the question. However, even in the inflationary scenario, there are way too many other outlets for excess liquidity for housing to benefit. Look at oil, commodity, and gold prices year over year. These are the assets that are likely to profit from an inflationary spiral, not housing.

This post has been republished from Moses Kim's blog, Expected Returns.
Posted by: NuWire Investor @ 5:47 AM

Email ThisBlogThis!Share to TwitterShare to FacebookShare to Pinterest
Labels: housing