The Disruption Of "Long Wave" Theories By Unprecedented Money Creation

John Rubino discusses the disruption of "long wave" theories by the unprecedented creation of money by the world's central banks. However, instead of preventing a deeper down cycle, this strategy may have simply delayed and amplified the down stage. See the following post from Dollar Collapse.

The fascinating thing about “long wave” analysis (broadly defined to include Kondratieff waves, Elliott waves, and William Strauss and Neil Howe’s Fourth Turning) is that while each theory uses its own indicators and terminology to show how societies move through recurring cultural/psychological/financial stages, they’ve all reached the same conclusion: we’re toast. 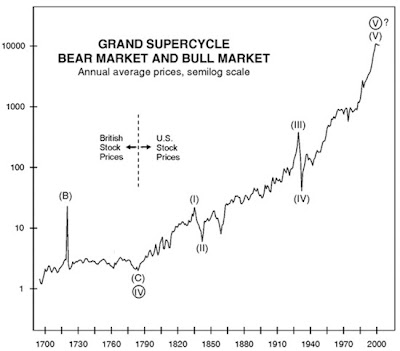 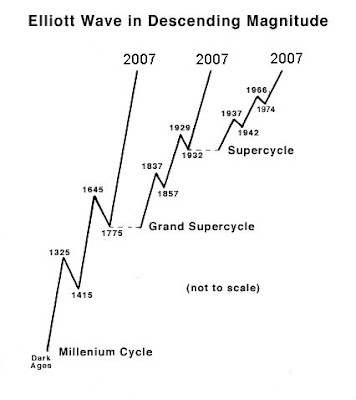 …the start of a Kondratiff winter… 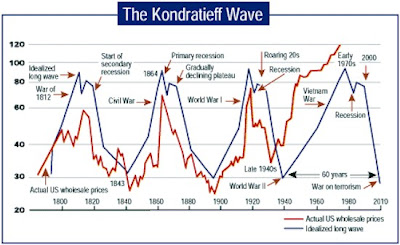 …and the beginning of a Fourth “Crisis” Turning. As Strauss and Howe put it in 1997:

Around the year 2005 [give or take a few years], a sudden spark will catalyze a Crisis mood. Remnants of the old social order will disintegrate. Political and economic trust will implode. Real hardship will beset the land, with severe distress that could involve questions of class, race, nation and empire.…Sometime before the year 2025, America will pass through a great gate in history, commensurate with the American Revolution, Civil War, and twin emergencies of the Great Depression and World War II….The risk of catastrophe will be very high. The nation could erupt into insurrection or civil violence, crack up geographically, or succumb to authoritarian rule. If there is a war, it is likely to be one of maximum risk and effort – in other words, total war…

But a funny thing happened on the way to the Greater Depression: We’ve somehow kept it together, inflating the housing bubble and when that burst replacing it with the government debt bubble. Policymakers, talking heads, and most investors (judging by the past year’s stock market action) seem to think that a normal recovery is underway and that the hard times are about to recede, like after the 1992 and 2000 recessions.

So did long wave analysis fail? Nah, it just bumped up against something new: an unlimited global printing press. Long wave theories are derived from history, and for most of history money has been sound — that is, gold and silver. In a sound money system, when debts reach a debilitating level they have to be liquidated, causing the 10-year contractions that follow 60-year booms. Past governments couldn’t derail this process because they couldn’t make more gold.

They still can’t make more gold. But over the past 40 years they’ve conned their citizens into thinking that paper, unbacked by anything real, is the same thing. Today’s central banks can print as much new paper as they want, and the global economy continues to accept it as money. This systemic gullibility allowed the US to nationalize its housing market, at a stroke increasing the public debt by half. And it’s allowing the EU to move Greece’s debt onto Germany’s balance sheet without setting off a panic.

This article has been republished from John Rubino's blog, Dollar Collapse.