Commerce Department figures showed that new home sales in February fell to an all time low while inventory of homes-on-market posted its fourth straight month of increases. Although some sources placed the blame for this decline on severe winter weather, a more plausible explanation is that it was caused by 2009's severe job losses. See the following post by Moses Kim from Expected Returns.

"Green shoots" continue to bypass the housing sector, and the rest of the economy for that matter, as new home sales in America fall to a record low. From Bloomberg, Sales of New U.S. Homes Dropped to Lowest on Record:

Sales of new homes in the U.S. unexpectedly fell in February to a record low as blizzards, unemployment and foreclosures depressed the market.

Purchases decreased 2.2 percent to an annual pace of 308.000, figures from the Commerce Department showed today in Washington. The median sales price climbed by the most in more than two years. 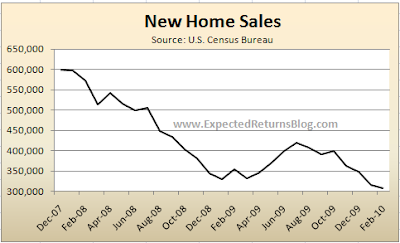 For your information, the 4.1 million jobs lost represents the largest number of job losses since the BLS started taking records in 1940. But with the combination of a dose of sophistry and some good old government spin, we have apparently pulled ourself out of this recession against all odds.

The supply of homes at the current sales rate increased to 9.2 months’ worth, the highest since May, from 8.9 months in January.

Housing, the industry that triggered the worst recession in seven decades as the subprime mortgage market collapsed, showed signs of recovering in 2009 as an $8,000 first-time buyer tax credit boosted sales ahead of its originally scheduled expiration in November.

Extension of the credit for contracts signed by April and its expansion to include some current homeowners has failed to boost sales in recent months.

New-home purchases are considered a leading indicator because they are based on contract signings. Sales of previously owned homes, which make up the remainder, are compiled from closings and reflect contracts signed weeks or months earlier. 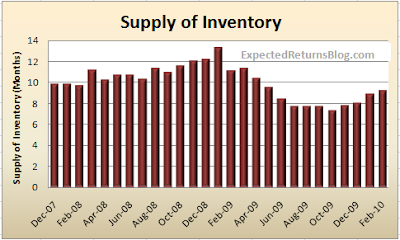 The weakness in new home sales will be reflected in weak existing home sale figures in the months ahead. Buyers aren't stepping in front of this train anymore. We need to see some inventory clearing, but inventories are now rising to levels from a year ago.

2010 will clearly be a year when housing comes under pressure once again. Let's not forget that the government is withdrawing from the direct purchase of MBS in a week. We should know very soon how mortgage rates react. In all probability, rates will rise significantly, which will deal a huge blow to the housing recovery that never was.

This article has been republished from Moses Kim's blog, Expected Returns.
Posted by: NuWire Investor @ 5:59 AM