The number of buyers placing homes under contract fell in January across the country due to what the media described as weather-related issues, obscuring the larger economic issues in place. As the economy continues to stutter without job creation and with the effect of government stimulus programs fading, the tight lending environment is preventing people from purchasing homes. See the following post from Expected Returns.

The short-lived economic "recovery" sure is running out of steam. I guess over $10 trillion dollars in in stimulus and pledges on behalf of taxpayers just doesn't buy what it used to. From Finance Yahoo, Pending home sales fall 7.6 percent in January:

The number of buyers who agreed to purchase a home fell sharply in January, a sign that demand for housing is sinking this winter as stormy weather slammed Eastern states.

Record snowstorms in January and February had many Americans shoveling sidewalks and driveways instead of combing through listings for open houses. Partly as result, seasonally adjusted index of sales agreements fell 7.6 percent from December to a January reading of 90.4, the National Association of Realtors said Thursday.

It was the lowest reading since last April and a disappointment to economists, who had expected it would rise to 97.6.

The weakness, however, was not confined to the wintry Northeast. The biggest month-to-month drop was in the West, where sales fell 13 percent. Sales fell almost 9 percent in the Northeast and Midwest and 2 percent in the South.

From the way the media spins things, you would think a couple of blizzards are doing more damage to our economy than decades of unsustainable debt accumulation. It's pretty comical, especially since the biggest month-to-month drop in home sales came in the West coast. But hey, let's not let facts get in the way.

The reason home sales are cratering is a matter of simple economics. The government merely shifted demand forward via its first-time homebuyer tax-credit, which provided a temporary boost to sales. There really is no free lunch- the tax-credit induced spike in demand must be balanced by weakness in demand in subsequent months.

Furthermore, without job creation, there can be no sustainable recovery in housing. Anyone who thinks otherwise is living in fantasy land.

The weather isn't the only culprit, wrote Jennifer Lee, an economist with BMOCapital Markets. "The impact of government incentives ... appears to be running out of steam, which is, frankly, a scary thought," she wrote.

The index is considered a barometer for future sales because typically there is a one- to two-month lag between a signed sales contract and a completed deal. A reading of 100 is equal to the average level of sales activity in 2001, when the index started.

The index has declined for two out of the past three months because home shoppers feel less rushed after a deadline for a homebuyer tax credit was extended from Nov. 30 to April 30. 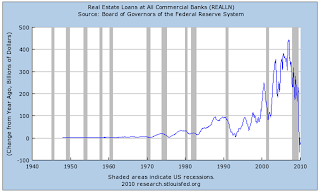 Notice how real estate loans stabilized and turned up in every single economic recovery since WWII. Apparently "this time is different" and the economy is magically recovering while access to credit is absolutely cratering. Sorry, but I'm not buying it.