Despite Claims, Economy Is On The Verge Of Depression

Although many sources continue to claim that the United States economy is in recovery, in the face of continued high unemployment a strong argument can be made that the economy is, in fact, still on the verge of a depression. Moses Kim supports this argument with the fact that unemployment is still double that at the beginning of the recession with long-term unemployment still climbing. See the following post from Expected Returns.

Doublethink means the power of holding two contradictory beliefs in one's mind simultaneously, and accepting both of them. - George Orwell

We truly live in interesting times when the public can so thoroughly be fooled about an economic recovery that has no basis in reality. If people would turn off their TVs for a second, they would have a much different view of the economy. At the very least, we are mired in a deep recession- although it is very likely we are in a depression.

No matter what times you live in, it is virtually guaranteed that a proportion of the population will always blindly believe any lies that are fed to them. Economic depressions are difficult to forecast since there are so many "dead cat bounces", which are always misdiagnosed as economic recoveries, on the journey to the abyss.

If the recession is truly over, then logically, there should be some kind of real improvement in unemployment data. However, a comparison between December 2007 (when the recession officially began) with today shows that unemployment is deteriorating. 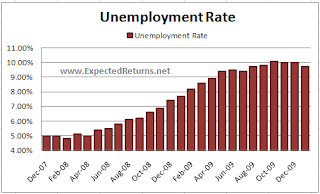 Long-term unemployment, or unemployment with a duration of more than 27 weeks, is still rising, and poses huge obstacles to a potential recovery. Although it looks as though legislation will be passed to extend unemployment benefits, the fact remains that states have no money. The Federal government is broke too. In order for a true recovery to materialize, we need to create private sector jobs and end the entitlement mentality that has silently penetrated the psyche of Americans. 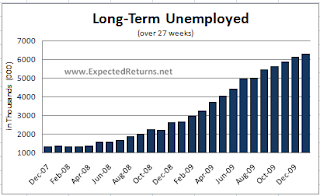 I don't know about you, but it looks to me as if the unemployment situation is far worse than it was in December 2007.

At this point it should be clear that the Obama administration has no power to reverse the downward spiral in housing. I've lost track, but I believe people have been calling the bottom in housing for what, 2 years now?

Arguments for a recovery in housing that never arrives go something like this: housing has already gone down 20%, it can't possibly go any lower. Then housing goes down another 10%, and the same logically deficient arguments for a housing recovery continue.

Let's try to detach ourselves emotionally for second and just look at some key data points that will help determine where housing is going in the future.

Right around March and April, everyone was calling for the bottom in housing. By August, there was outright euphoria about the "worst being over." Utter nonsense at the time, although it was hard to talk sense to people who didn't understand the bigger picture.

Now that new home sales have "unexpectedly" cratered to a record low, cheerleaders have gone back into hiding. Think about how amazing this is for a second. We have mortgage rates at record lows, first-time homebuyer tax credits, and lax lending standards courtesy of the FHA- yet home sales are way down. I'm telling you, when the government backs off to prevent an utter disaster in the bond and currency markets (although this is no guarantee given the stupidity of our leaders) this is going to get nasty. 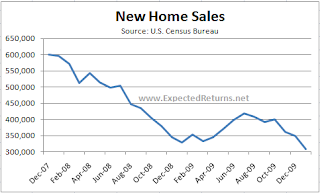 Inventories on the Rise

Plunging new home sales exacerbate the crisis of excess inventories, and this doesn't even include the growing shadow inventory of homes lingering on banks' balance sheets. There is a hidden foreclosure crisis in America that will become apparent in 2010. I don't see how housing prices can recover at the same time inventories, mortgage rates, and unemployment rise. 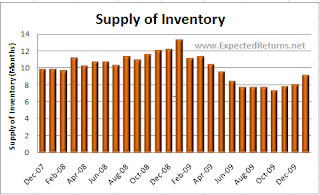 The downward spiral in housing was first a subprime and mortgage backed security crisis. We are now entering a period where the housing crisis is synonymous with the unemployment crisis. The coming wave of foreclosures will be driven by levels of unemployment we haven't seen in generations. The government can manipulate unemployment statistics all they want, but sooner or later, the real unemployment situation will be reflected in tremendous weakness in economic activity.

Our economic system is so dynamic that adding just one new variable to the equation has massive consequences. I don't know exactly what the catalyst will be, but there are way too many bullets for us to dodge in housing for me to be bullish.

This article has been republished from Moses Kim's blog, Expected Returns.
Posted by: NuWire Investor @ 5:48 AM