Nearly A Quarter Of Homeowners In Negative Equity Position

According to a recent report, over 11.3 million American homeowners, nearly one quarter of all homeowners with a mortgage, are now in a negative equity position, with forty percent of them upside down by at least twenty-five percent. In the face of this, home prices continue to fall and lenders are expected to continue tightening access to credit, which could lead to a currency crisis if the Federal Reserve prints additional money to stimulate the credit markets. See the following post from Expected Returns.

The meltdown in housing is moving along right on schedule unbeknownst to our politicians, who will have a huge crisis on their hands beginning sometime in 2010. From Marketwatch, 11.3 Million Homeowners Underwater on Mortgage:

More than 11.3 million homeowners -- nearly one-fourth of all Americans with a mortgage -- owe more on their loan than their home is now worth, according to a report released Tuesday by FirstAmerican CoreLogic.

More than 10% of people with mortgages owe 25% more than their home is worth.

The number of underwater mortgages increased by about 620,000 from the third quarter, the firm said. Another 2.3 million mortgages had less than 5% equity in their home, which could be wiped out if home prices fall further.

You will see foreclosures rise in 2010 across America. It is not a matter of if, but when. Home prices will not only have to stabilize, but they will have to effectively double in certain parts of the country for people to break even. I can tell you right now, that is not going to happen in real terms.

In the following chart of home prices, courtesy of David Rosenberg, you can see that home prices are still falling on a non-seasonally adjusted basis. This is a scary scenario given the government's intervention in the housing market and the historically narrow skew between long-term treasury rates and mortgage rates. In other words, even if treasury rates were to stay the same, mortgage rates would likely rise.


Even if the housing market was perceived by potential homebuyers to be stabilizing, where will buying power come from if lending is falling at an unprecedented rate? 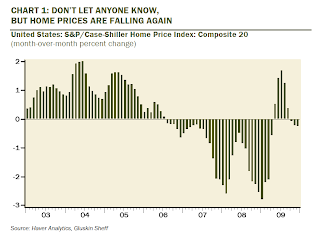 If you thought 2009 was bad for regional banks, watch what happens in 2010 when the implosion in commercial real estate really picks up steam. I expect access to credit to contract in the next couple of years as regionals really hunker down and repair their balance sheets. 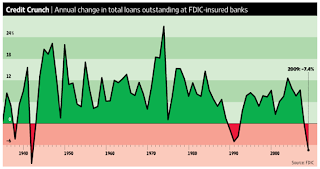 The only perceived recourse will be for the Fed to print unlimited amounts of money, which will result in a currency crisis. I believe this will be apparent in the next 2-3 years.