Confidence Among US Consumers Moves Lower

Even in the face of potential economic recovery, consumer confidence, a leading indicator, has continued to fall and has reached its lowest level in ten months, indicating that the double dip recession may be approaching. The cause of this continuing decline appears to be the ongoing lack of job creation in today's economy. See the following post from Economist's View.

So much for the economic recovery- co

nsumer confidence is falling, and it's falling fast. As I've been expecting, consumer confidence is plunging, reflecting the inflection point we have likely reached in our economy. There is no doubt in my mind the double dip is coming. From Bloomberg, Consumer Confidence in U.S. Falls More Than Forecast:

Confidence among U.S. consumers fell more than anticipated in February to the lowest level since April 2009 as the outlook for jobs diminished, a sign spending may be slow to gain traction as the economy recovers.

The Conference Board’s confidence index declined to 46, exceeding the lowest forecast in a Bloomberg News survey of economists, from a revised 56.5 in January, a report from the New York-based private research group showed today. Concerns about the economy and the labor market pushed an index of current conditions to its lowest in 27 years.


The Consumer Confidence Index and the Expectations Index are leading indicators to the extent that perceptions shape future actions. With both indexes plunging to 10-month lows, there is every reason to believe the next few quarters will be weak on the consumer front. Remember: no consumer, no recovery. 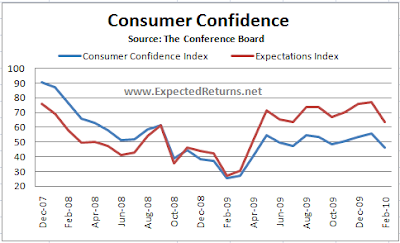 The following graph shows consumers' view of the present situation since the start of the recession. In February, the index fell to 19.4 from a January reading of 25.2. How anyone can claim we are in an economic recovery based on data points like these is beyond me. It is indeed axiomatic that if you repeat a lie enough times, it becomes accepted as truth. Many, including supposedly seasoned economists, are unwittingly being fooled by government lies about a clearly paradoxical "jobless recovery." 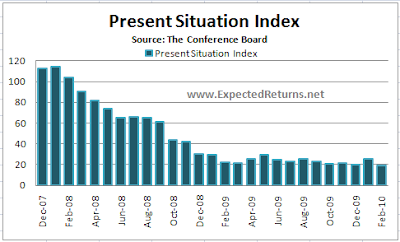 I don't care how many jobs Obama randomly claims that he has saved, the fact remains that there are no jobs. Ask the average blind supporter of the "jobless recovery" theory about the last time we actually experienced one and they'll likely give you a blank stare. The blank stare is warranted, since the whole concept of a jobless recovery is a modern phenomenon that has no firm standing based on historical data.

Nearly every single data point shows the economy is in worse shape than it was at the onset of the recession. Get ready to hear the airwaves filled with news of an "unexpected" double-dip recession. As you all should know by now, I expect gold to explode as a result.