Thinking Backward Can Make You Miss The Rally In Gold

Moses Kim from Expected Returns is very bullish on Gold for 2010 and sees the recent slide in price as a short-term setback. By focusing on what can happen in the future rather than trading based on mistakes made in the past, investors can avoid missing the rally in Gold. See the following post from Expected Returns.

Gold is in the middle of a very healthy correction that has done nothing to alter the bullish trend in gold. The consensus seems to be that gold should correct considerably more, at least to the $1,000 dollar level. Even many gold bulls see much lower prices before the gold bull market resumes.

What happens often is that people trade based on what they wish they did before. For example, people who failed to short stocks during the epic collapse of 2008 were the same people trying to short stocks for the better part of this historic rally. In the same way, people who missed the huge move in gold are hoping for a huge correction so that they can buy shares. Unfortunately, the market rarely obliges hopes like this.

If we remove our emotions from our analysis for a second, we can see that gold is in a bullish consolidation mode. We are sitting right at the 50 day moving average, and the 200 day moving average has recently moved past $1,000 dollars.

Technically, gold needs to push past $1,150 dollars for the next phase of this bull market to begin. Above $1,170 dollars and we're likely to retest all=time highs in short order. 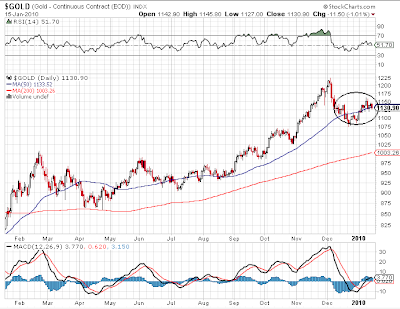 A useful measure of the relative cheapness of gold shares is the gold to xau ratio. As a general rule of thumb, a ratio above 4.0 is a strong buy signal for shares. The current gold to xau ratio of 6.5 is a level that has consistently produced year-long rallies of over 50% in the past. The past year should have been used to accumulate shares at cheap levels. 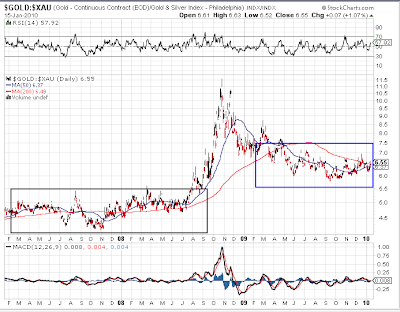 Gold shares were pressured by general market conditions in 2008, but they have recovered strongly. In the chart below, notice that gold shares are below all-time highs. It is hard for me to see how stocks that are trading at the same level of 2 year ago are a bubble. 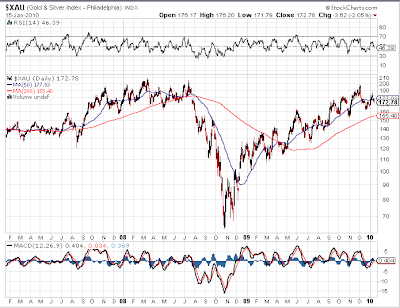 I am very bullish on gold in 2010, and I believe $1,130 will look mighty cheap by the end of the year. There will be a number of surprises in 2010 in various asset classes from real estate to stocks and gold. When the economy starts to implode again in 2010, I expect gold to explode.