Moses Kim explains why gold equals money and the value of gold will inevitably increase when the excess money printing policies finally catches up with us. A government default, high inflation, or a general panic could send gold values soaring. See the following post from Expected Returns.

The volatility we are currently witnessing in the gold market, especially in gold shares, is something we have not seen in some time. This reminds me a lot of 2008 when gold shares would have 10-20% days both on the upside and the downside. Newcomers to the gold market are no doubt throwing in the towel.

In five years, current prices will look like a gift. With that being said, I want the new money in gold out. I want the media to start bashing gold. I want Nouriel Roubini to pat himself on the back on National TV and convince even more people to sell. Then I'll know we're close to reversing.

Gold will eventually start basing, perhaps at the $1,050-$1,070 dollar level, and start the next phase of this bull market. When it does, I want to have a large position in place. This means buying on weakness, however hard that may be at the time.

I assume most of my readers are "gold bugs". But even so, it pays to have occasional reminders of why we are invested in gold. With that in mind, I present you with one of the best gold quotes of all time from the Maestro himself, Alan Greenspan:

"In the absence of the gold standard, there is no way to protect savings from confiscation through inflation. ... This is the shabby secret of the welfare statists' tirades against gold. Deficit spending is simply a scheme for the confiscation of wealth. Gold stands in the way of this insidious process. It stands as a protector of property rights. If one grasps this, one has no difficulty in understanding the statists' antagonism toward the gold standard."

Make no mistake about, the attacks against gold are colored by a bias against what gold offers- namely protection against governments and their #1 ally, the printing press. Governments always make promises that they cannot possibly keep. Two mammoth promises, Social Security and Medicare, are about to be broken. The political backlash will be quite severe. Gold will rise in response.

Gold is in a very healthy upward trend, even in the following arithmetic chart. As long as we hold above $800 dollars, the long-term bull market remains intact. This means you should be buying every dip.

Although many Americans are starting to wake up to the corruption of our government officials, most Americans are still asleep. Anyone who criticizes the government is labeled a right-wing extremist or conspiracy theorist. The uneducated masses nod in zombie-like agreement while getting robbed in broad daylight. As an American, this is very sad to see.

Eventually, there will be a general panic that will send gold prices flying. I am just unsure about what the catalyst will be. Perhaps it will be a mini run on banks once mark-to-fantasy accounting is removed. People who have been conditioned into believing that paper is money will then find out what "gold bugs" have known all along: gold is money.

Bring out the Helicopters Ben

What people need to understand is that our economy is exhibiting incredible weakness, especially when you account for the stimulus the Fed has pumped into the system. Jobless claims are rising again, housing starts are down, and consumer confidence is falling. Once residential real estate starts falling again, things will get messy. Refer to the chart below to get a glimpse of the massive resets that lie ahead. Folks, get ready for the double dip. 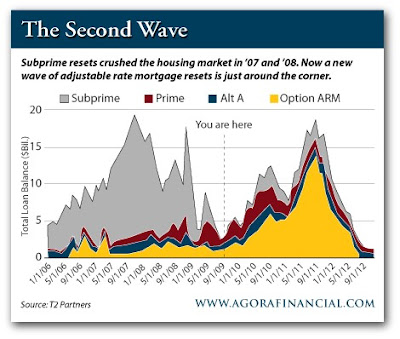 Serious cracks will emerge in our economy soon. "Unexpected" economic weakness will be met by "extraordinary" measures by the Fed. Helicopter Ben will use high-brow economic jargon to mask what he is really doing, which is printing money. From his perspective, there is no other way out of this debt crisis. Default is not an option. 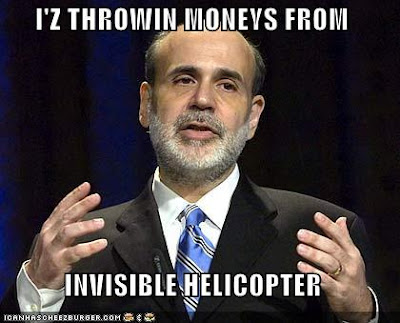 I would like to see gold reverse in the next week or two- otherwise I think we're in for a more prolonged decline, which I believe will be measured in months. Nonetheless every sell-off is a buying opportunity for those with eyes to see. Prepare while every one is sleeping.