Chinese Offical Hints Of Plans To Buy 10,000 Tons Of Gold

Moses Kim points out a quote by a Chinese official that reveals that there are some in the Chinese government that would like to greatly expand China's gold holdings to as much as 10,000 tons. China has $2.27 trillion in foreign exchange reserves and currently is the fifth largest holder of gold. See the following post from Expected Returns.

Dubai's debt crisis could be China's opportunity to snap up gold and oil assets, a senior Chine

China's $2.27 trillion in foreign exchange reserves are mostly parked in U.S. treasuries, despite calls from some in China to invest the reserves in oil and other natural resources that the fast-growing Chinese economy will need in future.

China's move away from dollar-denominated assets is a long-term process. Every single opportunity provided by the market to unload dollars will be used by the Chinese to buy hard assets. Supported from buying pressure from emerging economies, I believe commodities are still in a long-term bull market.

While the impact of the Dubai crisis on the global economy and on China was not known yet, it would last a while at the very least, Ji Xiaonan, who chairs the supervisory board for big state-owned companies under the State Council's state assets commission, told the Economic Information Daily.

"That could give China a buying opportunity to put some forex reserves into gold or oil reserves," Ji was quoted as saying by the paper, which is widely read by Chinese officials.

China last acknowledged a change in its national gold holdings in April, when Hu Xiaolian, head of the State Administration of Foreign Exchange (SAFE), told Xinhua news agency that the country's reserves had risen to 1,054 tons from 600 tons since 2003.

But it did so by buying domestically produced gold to help soak up unsold output. It has not yet shown any interest in buying from international gold markets.

"If the gold price comes down for a while, we might take the opportunity to buy a bit," the Economic Information Daily, run by Xinhua news agency, quoted economist Li Yining as saying.

If these projections for gold purchases are ever met, you can expect to see much, much higher prices for gold. India recently made headlines by buying 400 tons of IMF gold. Now imagine the impact of over 5,000 tons of gold purchases over a 3-5 year period. In the following chart, note how China still is a relatively small player in the gold market. Only 1.9% of China's foreign exchange reserves are currently in the form of gold. To compare, over 77% of U.S. foreign exchange reserves are in the form of gold. 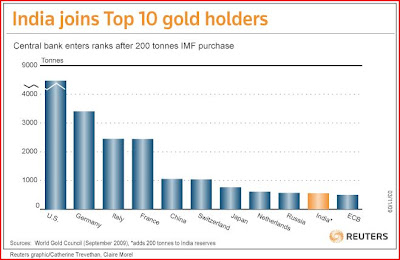 As you can see, China still lags Western nations in terms of gold holdings. What I expect to occur over the next decade or so is a transfer of wealth from the West to the East, which will be evidenced by the accumulation of gold. The same process occurred up until WWII when capital fled, in the form of gold, to the U.S. At one point during WWII, we held most of the gold in the world, which amounted to over 20,000 metric tons of gold.

As we move out of the eye of this economic storm for the ages, gold will continue to be the safe haven of choice for investors. Remember, it will take a long time for central banks to become net sellers of gold again, which means we have a solid floor to this market.