5 Reasons The Dollar Could Collapse

Moses Kim gives several reasons why the dollar could collapse leading to a depression in the United States. He discusses the dangerous consequences of a $100 trillion in unfunded liabilities (including social security), a trend of countries bypassing the dollar in international trade, and a massive oversupply of dollars. See the following from Expected Returns.

The history of the dollar is one marked by a dominance unrivaled in history. Following the Bretton Woods Agreement of 1944, which established the dollar as the global reserve currency, Americans have enjoyed an era of unprecedented wealth and prominence.

The impressive growth in America could not have occurred without a stable dollar. Stable currencies are the unheralded but undeniable foundation of any vibrant economy. Stable currencies allow for longer term transactions and help instill confidence in the public, which is critical, since the value of any fiat currency is ultimately a function of public confidence.

That being said, there are several factors that lead me to believe the dollar is headed for a precipitous decline, and that this decline will exacerbate what I perceive currently as a Depression in our country.

The value of a currency is determined by a number of variables. In this article, I will focus on the dynamics of demand, supply, current account deficits, and aggregate government debt.

The dollar has enjoyed a boost in demand and an exchange rate premium due to its privileged role as the world's reserve currency. As a function of this status, world trade is, for the most part, transacted in dollars. However, recent developments on the periphery have slowly undermined the dollar's dominant position in global trade.

World trade in dollars has been declining since the start of the decade. Recent currency swap agreements between countries, mostly involving China, have been used to bypass the dollar in global trade. Arrangements such as these threaten the dollar's role as global reserve currency, removing any support to the dollar's value such an arrangement provided. This decreased demand is clearly reflected by a falling percentage of foreign reserves held in dollars. 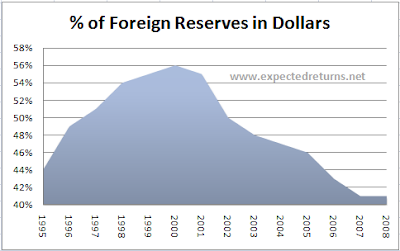 Further, in a low interest rate environment, the dollar has become the carry trade currency of choice. Investors have long been waiting for a powerful countertrend rally in the dollar, but as the example in the yen shows, prolonged weakness in carry trade currencies can and do occur. Also keep in mind that alternative assets, such as gold, become much more attractive in an environment where yields are essentially 0%.

It's been well-documented that the Fed has embarked on a campaign of massive monetary stimulus. Unfortunately, it's hard to quantify the extent of money supply growth, since the government has stopped reporting M3 money supply figures.

The real problem brewing under the surface are accumulating bank reserves, which can be thought of as a proxy for risk aversion. Once these reserves are deployed, expect inflation to increase significantly. Sooner or later, banks will have to focus on their core business, which is lending to consumers. Here is a chart of the quickly accumulating bank reserves. Is there any question there will eventually be a flood of dollars hitting the system? 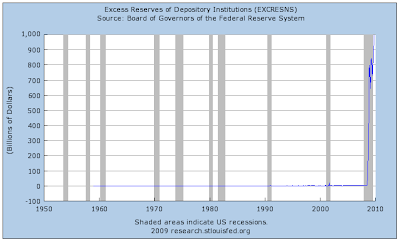 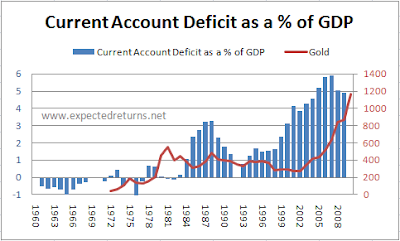 Moving forward, the Treasury market will inordinately dictate major moves in the dollar. But before I explain why, I want to briefly overview the relationship between treasury debt, inflation, and the value of the dollar under the Maestro, Alan Greenspan.

The "great moderation" in the Greenspan years was facilitated by the recycling of dollars into our capital accounts- such as stocks, treasury debt, and agency debt. This meant that inflation was temporarily stifled as dollars were sterilized in debt instruments, while asset prices received a jolt from the attendant low interest rates. Furthermore, the tremendous demand for U.S. capital products proved to be supportive of the dollar. If there ever were a period of getting "something for nothing" in America, it was during this era of massively inflated asset prices, and moderate consumer price inflation.

Now what happens when our debt grows to a level that forces the government to become a major player in the bond market? Foreign actors will start unloading their treasury debt, especially on the long end of the yield curve, to an increasingly overburdened government. As demand for Treasuries falls, yields will rise, which makes the burdens of servicing debt greater. 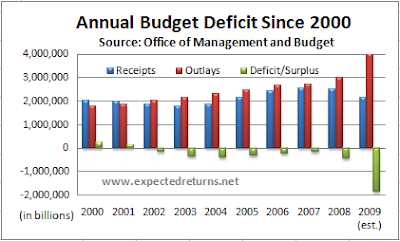 Due to collapsing tax receipts and excessive stimulus measures to stave off the effects of this crisis, our budget deficit has exploded in 2009. This phenomenon is what forces our government to "monetize" debt.

The monumental and ever-increasing level of debt the government has directly taken on through its program of quantitative easing is troubling. The reason is simple: in an inflationary environment, the Fed will be inhibited from containing inflation by selling bonds in the open market, and thereby, soaking liquidity from the system. Due to the sheer size of our program of monetization, any move to sell treasury instruments will likely be met with panic from foreign investors. This is something to keep in mind moving forward.

And now we come to the elephant in the room: aggregate government debt, including unfunded liabilities. Decades of kicking the debt can down the road in Ponzi scheme entitlement programs, like Social Security, has created a behemoth of debt that is quite literally unpayable. Absent a growth miracle, and a bigger miracle of fiscal austerity by our government, there is no way we can fund these accruing liabilities through our dwindling tax base.

According to the Dallas Fed, current unfunded liabilities are about $100 trillion dollars. While a restructuring of entitlement programs is absolutely necessary, it is not politically viable. If recent government actions are any indication, our government will attempt to mask insolvency through the printing press.

Conclusion: Implications of a Weaker Dollar

A weaker dollar poses tremendous complications for Americans. For one, it makes imports more expensive, which is effectively inflation. Ultimately, this means a standard of living lower than what we have come to expect. If confidence in the dollar totally erodes, then things will really get ugly.

While we could possibly stave off an inflationary spiral if we enacted the correct policy right now, the reappointment of "Helicopter" Ben Bernanke all but destroyed any hopes of a stable currency. The inflationary spiral of the late 70's and early 80's was brought to a halt through the politically unpopular actions of Paul Volcker. It's counterintuitive, but central bankers that are denigrated politically are doing their job correctly. Celebrated central bankers like Ben Bernanke are succumbing to political pressure, making decisions based on expedience rather than prudence. The inherent deficiencies in our system virtually guarantee that long-term implications of massive debt will be ignored. Unfortunately, the "long-term" may finally be upon us, and a dollar collapse of shocking proportions is increasingly likely. This Depression is just getting started.