A lot of investors have the same potentially misguided advice ingrained into their heads — stocks over the long run always go up. While that indeed might be the case, how long will you have to wait to see those returns? It may be a good strategy for young people just getting started in life, but it certainly is not the right strategy for everyone. For more on this read Tim Iacono's blog post below:

I don't know. I suppose that if most of what I did over the last few decades revolved around compelling individual investors to buy stocks for the long run, come what may, it might be difficult to look at things objectively. 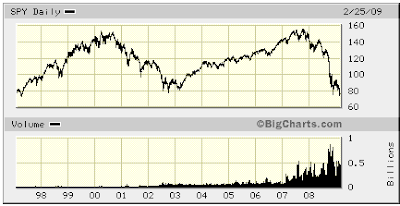 Denial is a powerful force in the world and perhaps one of the most under-appreciated.

These days, a lot of people are having a very hard time with the whole idea that individual ownership of stocks (and now real estate) is not the panacea that they once thought.

That doesn't, however, stop them from encouraging individuals to just "tough it out", likely knowing that, eventually, their advice will pay off - whether or not that advice will pay off in time to fund the retirement of a generation of baby boomers is another question entirely.

Word comes this morning from the Wall Street Journal's always-interesting Jason Zweig that it might be some time before things are hunky-dory again.

In this story coming in advance of tomorrow's update of long-term investment returns by finance professor Elroy Dimson of London Business School, the news is decidedly unfriendly for your typical aspiring retiree with money in the stock market.

The good professor estimated that we'll have to wait nine more years before stocks have even half a chance of hitting their highs of 2007. That is, back when millions of baby boomers started eyeing their retirement account balances again as the housing bubble was meeting its pin.

Who knows what the condition of the U.S. or global economy will be by then?

If you're still sticking with the program of "stocks for the long run", maybe this report at Money Magazine will cheer you up. In one of the daffiest assessments of equity markets that have crossed my computer screen in quite some time, Paul J. Lim, a senior editor at Money Magazine explains how the lost decade that just occurred, really wasn't such a loss.

Yes, it's true that the Dow Jones industrial average sits more than 1,000 points below where it was 10 years ago. But that's irrelevant to your investing strategy for three reasons. First, it's an arbitrary amount of time. We're hung up on it because 10, as University of California-Berkeley finance professor Terrance Odean notes, "is a nice round number we can all relate to."

Second, the market's performance over the past decade is a red herring because the period you're judging starts near the absolute pinnacle of irrational exuberance, when stock valuations - as measured by price/earnings ratios - were absurdly high. If you measure from the end of the last bear market, in October 2002 - when stock prices were still higher than average, by the way - you'll see that the Dow has returned 4.5% a year (including dividends) while the Standard & Poor's 500 index has gained 3.4% annually.

Third, as T. Rowe Price financial planner Stuart Ritter notes, "The only people the lost decade accurately applies to are those who invested absolutely nothing before the late 1990s, put all of their money in at the market peak and invested absolutely nothing ever since." If such an unlucky soul does exist, history suggests that he'll be rewarded.

And, the moral of the story is, of course, stick with the plan - stocks for the long run.

I'll never forget that info-session back in 2001 when I was first coming of age with this whole stock market/retirement planning trip when the Fidelity rep hemmed and hawed when he was asked why we should continue to invest in stocks after an eighteen year run had just come convincingly to an end the year prior.

I asked, "Don't these markets move in long 'secular' cycles of 15 or 20 years? If so, doesn't that mean that we're due for a 'secular' bear market?"

He didn't really know what to say - he was just a twenty-something trying to stick to the script before a crowd of thirty- and forty-somethings who were starting to think seriously about their retirement planning.

Some, more than others, obviously.

Jason Zweig is a fabulous writer and Money Magazine is great for evaluating whether or not you should upgrade your kitchen, but I stopped listening to their investment advice years ago.

That was a good decision.