The Next Big Bubble To Burst: U.S. Treasuries

Everyone in the world knows that the U.S. has a huge debt, and that the U.S. economy is performing poorly. Yet, people are flocking to U.S. treasuries like never before driving yields down to record lows. The U.S. has no plans of stopping the debt train, though, so who knows how high it will go. We are on uncharted ground right now, and all it would take to push this train off the tracks is one major debt holder to start selling. Lots of other bubbles have burst recently, so why not possibly the biggest one of all? Needless to say if this happens there will be serious ramifications for the U.S. and the rest of the world, which is probably why it hasn't happened already. Toni Straka from The Prudent Investor looks closer at this looming problem in his blog post below.

Having seen most of the bubbles bursting I had listed in this post from 2005 the world may soon be in for the mother of all bubbles. With a size of $10 trillion the US government debt market has remained the world's #1, now that MBS have shed the better part of their initial values.

US treasuries have long been hailed as a safe haven for money fleeing from other overheated markets. Massive losses in more or less all other asset classes in the past 15 months have shown that investors followed Pavlov's reflexes, driving the 10-year yield to a record low of 2.55% last week.

CHART: The yield for 10-year US Treasury debt fell to a record low of 2.55% last week. This chart may see a sudden reversal based on the fundamentals.

It may be questioned whether this trust into the Federal Reserve's ability to contain long term inflation is justified, given the fact that chairman Ben Bernanke will enter history as the fastest money printer of all times.

While the Fed has reduced its federal debt holdings by $290 billion to $484 billion (buying doubtful MBS instead) in the last 12 months it was foreign investors TIC data and Treasury statistics show. 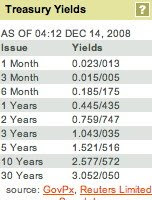 This has driven yields across the curve to record lows, leaving investors with a negative real yield when discounting inflation. US Inflation was 3.7% YOY as of October.

Institutional investors have been allocating more money into US treasuries recently, citing the safe haven status of American government bonds. But this era may be coming to an end as so many things do nowadays.

There appears to be a split of opinion. While European and American investors follow the old rule of buying US debt with a questionnable AAA rating their Asian counterparts see themselves trapped with US debt holdings they cannot sell in order to avoid a panicky stampede out of the biggest market of all. 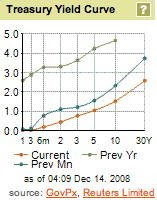 The deficit outlook justifies a skeptical approach. Barack Obama will have to finance a budget deficit of an estimated $1 trillion in 2009, the biggest in American history. If Mr. Obama will not manage a U-turn in foreign policy which was mainly based on ignorance and arrogance under Bush, he could run into financing problems. China has urged other countries to replace Federal Reserve Notes with their own currencies in bilateral trade and voiced its concern about US fiscal policy repeatedly.

The global downturn may bring a different borrowing climate too. Losses in all asset classes across the board and record low yields will result in lower reinvestment amounts overall, it can be safely projected.
The borrowing needs will skyrocket as both the federal government and bankrupt local communities will scramble for funds to replace sudden drops in tax revenues.

Bets On A US Default Become More Expensive
While still being a mainstay for investors from all around the world, not everybody is confident about the future of a USA in the grip from the biggest financial crisis ever. Some wary souls are increasingly buying insurance against a default of the US government. According to a Reuters report from November 26, credit default swaps involving Treasuries reached a record high.

In plain language this means investors were willing to pay $54,700 to insure a portfolio of $10 million 10-year debt paper.

Summarizing the fundamentals such as no end to new debts, tax shortfalls, higher social and military expenditures, a central bank willing to monetize the debt and flooding the world with fresh Federal Reserve Notes, it can be safely bet that this bubble will end like all bubbles: In a gigantic burst that will unsettle everything we have learned about investing in the past.

A hat tip to Econbrowser who undug this paper by Stanford economics professor John Taylor on the failures of the Fed in the current crisis and why it all became worse this autumn.

I stand by my opinion that monetary inflation is in the early stages worldwide and will have seeped through into the real economy in 2009/10.