The Fed Seeks Ability To Issue Own Debt

The Fed can't get enough money from the Treasury to fund all their ventures, so what do they do? Simple, they request the authority to issue their own debt. If Congress approves this measure it would give the Fed even more power, an idea that should be at least a little scary to taxpayers. Tim Iacono from The Mess That Greenspan Made looks closer at this new development in his blog post below.

One of the great mysteries of our debt-fueled financial system in general and central banking in particular is exactly when it is that "money is printed", a phrase that is thrown around quite casually by far too many people when maybe it shouldn't be.

Our fractional reserve banking system effectively "prints money" each time a new loan is made. That much should be clear. With a ten percent bank reserve ratio, each new $1,000 in deposits can generate $10,000 in loans. Where does this extra money come from? It is created "out of thin air". That's the way banks work.

Up until late-2007, Wall Street's "shadow banking system" did something similar, however, it apparently had what amounted to a zero percent reserve ratio which is one of the major reasons that we have the crisis that we have today. 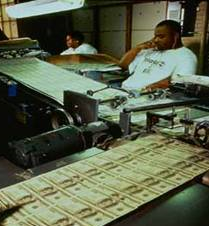 As for the U.S. government, "printing money" is performed by the Federal Reserve when it buys Treasury bills (or any other assets of questionable quality) and in return provides money that it creates "out of thin air".

This is generally frowned upon for obvious reasons.

Largely as a result of the willingness of our Asian trading partners to do so, the Fed has not needed to buy much U.S. debt in recent years, its balance sheet remaining fairly constant at around $800-$900 billion up until a few months ago when Lehman Brothers was allowed to fail and the downward spiral commenced.

As most everybody knows, the Fed's balance sheet is now almost $1.5 trillion bigger, prompting the question of where exactly this $1.5 trillion came from.

Well, some of it came from the Treasury Department but, as discussed last week, a good portion of this was simply "created out of thin air" and then exchanged with companies like AIG for one toxic asset or another.

It is all adding up very quickly and, with no end in sight for the current crisis, it should come as no surprise that the central bank is looking for ways to get even more money into the system without people all around the world wondering about where all the money is coming from.

According to this report in today's Wall Street Journal, it seems the Fed is now looking at issuing its own debt in order to bypass that cumbersome Congressional approval process for issuing Treasuries.

Government debt issuance is largely the province of the Treasury Department, and the Fed already can print as much money as it wants. But as the credit crisis drags on and the economy suffers from recession, Fed officials are looking broadly for new financial tools.

Fed officials have approached Congress about the concept, which could include issuing bills or some other form of debt, according to people familiar with the matter.

It isn't known whether these preliminary discussions will result in a formal proposal or Fed action. One hurdle: The Federal Reserve Act doesn't explicitly permit the Fed to issue notes beyond currency.

As Andre Agassi used to say, "Image is everything".

Why look bad when the rest of the world remains scared to death of global financial markets, more than willing to continue gobbling up U.S. debt at ridiculously low yields, and your only real problem is that your government can't authorize enough spending fast enough?