Central Banks Around The World Continue With Rate Cuts

Last week the U.S. cut their Fed Funds rate by 0.5, and now the rest of the world is following right behind issuing rate cuts of their own. Tim Iacono from The Mess That Greenspan Made looks closer at these interest rate cuts and evaluates what that mean for Gold.

Quarter-point interest rate cuts seem so passé in the new world financial order. It seems that, if you're going to cut interest rates, you need to cut by at least a half-point, otherwise your central banker friends are going to laugh at you.

In the ongoing game of competitive currency debasement, the Bank of England made a bold move this morning in pushing lending rates to their lowest level since 1955, shocking world markets with a cut of 1.5 percentage points - from 4.5 percent to 3.0 percent.

That made the half-point cuts by the European Central Bank and Switzerland's central bank look downright wimpy by comparison.

The BOE leapt past the euro-zone where interest rates are now 3.25 percent and looks intent on catching up to the Swiss in short order where the key lending rate now stands at 2.0 percent. Then it's on to the Americans where the Fed funds rate is 1.0 percent and perhaps even Japan, where interest rates have not exceeded one percent for many years. 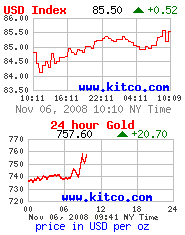 As has been the case for months now, all of this slashing of rates in Europe has made the U.S. dollar stronger by comparison and, on one of those rare days when the dollar and precious metals move together, gold and silver have posted even bigger gains.

The much lamented, negative correlation between the U.S. dollar and gold looks like it will be put to the test in the period ahead - and for good reason.

A rising U.S. dollar - a currency that only looks less bad than all of the world's other paper money at this time - provides no fundamental reason why the gold price should move lower.

On days like today, the real fundamental relationship is once again on display - gold is rising against all of the world's currencies, as it should.

While there are many factors that contribute to the dollar-gold relationship, it is sometimes maddening to watch central banks around the world make money cheaper and cheaper in an effort to pull the global economy up out of its nosedive, while nature's money just sits there and goes along for the ride.

Gold deserves better than that.

After all, the nosedive of the global economy was rooted in the reckless expansion of money, credit, and its various Wall Street offshoots which can be collectively termed "cheap money", and as it becomes increasingly clear that the cause and the cure can not be one-and-the-same, gold should continue to shine.

With the world's bankers and economists having failed so badly in stewarding paper money into the new century, there is increasing talk of a Bretton Woods II or some other "improved" monetary system where precious metals and/or other commodities may play a role.

Yes, they'll go kicking and screaming back onto a "commodity-backed" currency, but one look around the world today should make clear that we are not yet ready for a global system of pure fiat money - we may never be ready.